Sharia law allows for practices unacceptable in the West. This article by Danial Greenfield gives us the statistics on how many petitions there have recently been “for spousal or fiancé visas for or on behalf of minors…” He notes, “Even while the United States was claiming to fight sex trafficking in underage girls, our own immigration system was rewarding and promoting the sexual trafficking of girls as young as thirteen […] As long as child marriage remains a part of Islam, Islamic immigration will continue to be a vector for the sexual abuse of children in the United States.” The petitions are also an indication of how poorly many immigrant and native-born Muslims assimilate.

This video is from an article entitled, “Islamic clerics in Iraq arrange selling of 9 year olds for “pleasure marriages” by Avi Abelow. (here.) As Abelow writes, “Listen to this Islamic cleric in Iraq. Technically speaking, he is just promoting Sharia Law. The problem is that Sharia Law is appalling and sickening. What religion allows for 9 year old orphans to be sold for something called a ‘pleasure marriage?’ Being sold and forced to marry AT ALL is wrong. Even if someone is of marriageable age, they should not be sold into a marriage. But especially a 9 year old orphan? How can this be happening in our world?” 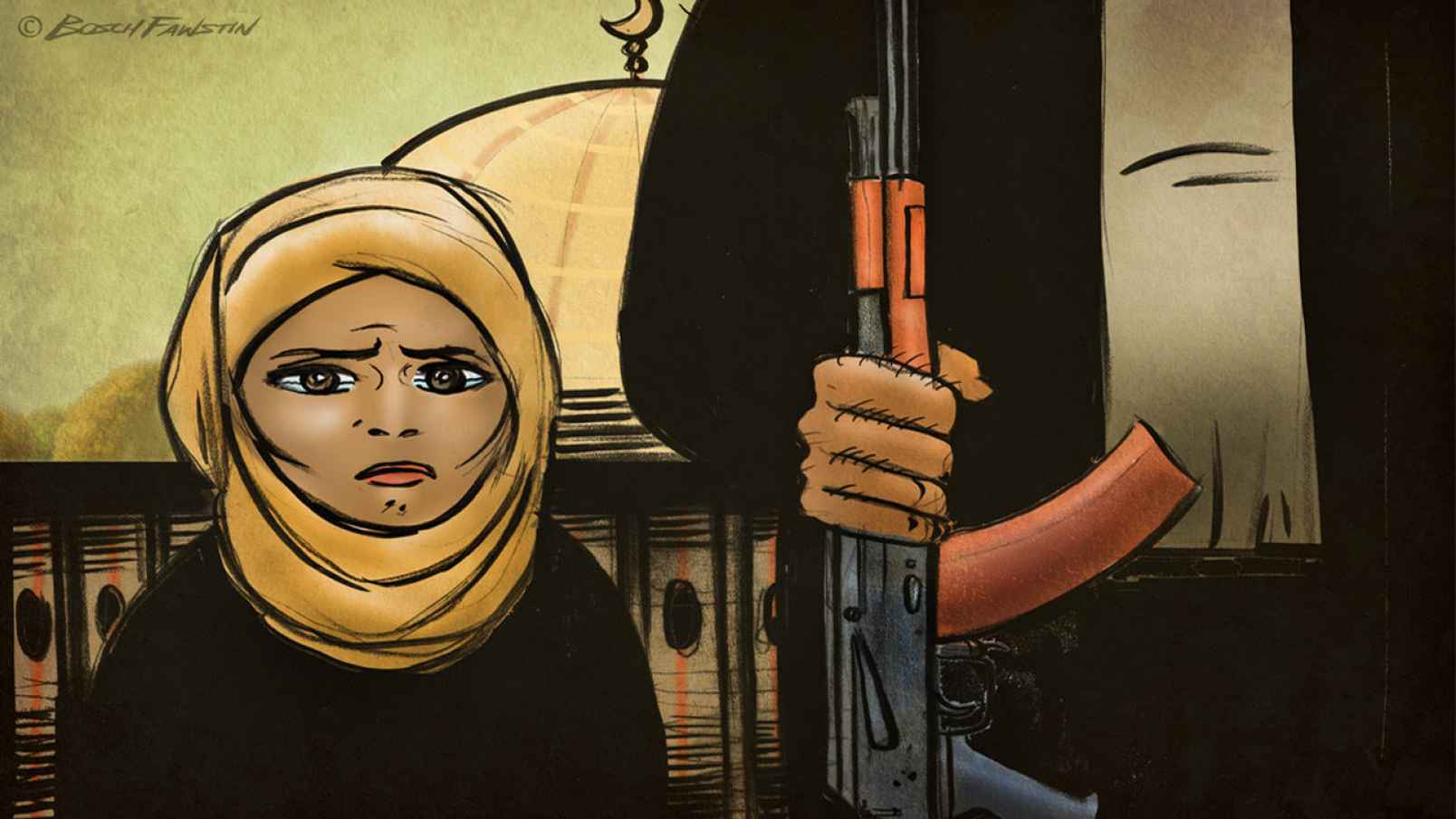 Naila Amin was only thirteen years old when she was[1] married off to her Pakistani first cousin twice her age who beat and raped her. “He dragged me about twenty feet – the whole length of the house – by my hair,” she relates. “He began kicking me in the head and it was so hard I saw stars.”

She described how,[2] “My mother would watch my husband and my father kick me together in the head.”

Even though Nalia was a United States citizen, she was engaged to be married when she was eight years old.[3] And at thirteen,[4] her application to bring her rapist[5] to the United States was approved by USCIS.

By the age of fifteen, she was being raped and beaten in Pakistan.

While Nalia is the youngest of the “child brides” in the Senate report,[6] “How the U.S. Immigration System Encourages Child Marriages”, the young abused American citizen is one of thousands of young girls who are either trafficked into this country or who are used to bring their older “husbands” to America.

Between 2007 and 2017, there were 8,686 petitions for spousal or fiancé visas for or on behalf of minors. And during that same period, 4,749 minors on spousal or fiancé visas got green cards. Even while the United States was claiming to fight sex trafficking in underage girls, our own immigration system was rewarding and promoting the sexual trafficking of girls as young as thirteen.

While the Senate report reveals that is the leading child marriage trafficking country, with 3,297 spousal visa petitions filed and 3,123 approved is Mexico, most of the countries in the top 10 list are Muslim.

2,152 spousal and fiancé petitions for or on behalf of minors from Muslim countries were approved.

These numbers are extremely incomplete. No country is listed for over 3,000 of the petitions. But Muslim countries still make up 13 of the top 20 destination countries for child marriage trafficking.

The Senate report also reveals a more disturbing statistic. While Mexico had the highest number of underage petitions, that’s because it has a high rate of immigration to the United States. When the report evaluated the percentage of child marriage petitions among visa petitions in general, Muslim countries entirely dominated the list with 3% of Jordanian petitions, 2.8% of Iraqi petitions, 1.6% of Yemeni petitions, 1.4% of Lebanese petitions and 1.2% of Pakistani spousal petitions involving minors.

These numbers show how prevalent child marriage is in Muslim countries and how much of a role our immigration system plays in importing child sexual abuse under the guise of marriage into America.

As Muslim immigration to America increases, the rate of child marriage trafficking will rise along with it.

Nalia’s case is unique because there were only two 13-year-olds who had spousal and fiancé petitions approved by our immigration system. The other 13-year-old was due to marry a 55-year-old man.

The overwhelming majority of minors featured on these child marriage petitions were girls.

But that’s not the most disturbing statistic in the report. While USCIS limited itself to approving child sex trafficking visa petitions for children as young as thirteen, no age was too young for the petition filers.

69 petitions had been filed for nine-year-olds.

In a truly disturbing trend, there were more spousal and fiancé petitions filed for nine-year-olds than thirteen-year-olds. The number of petitions sometimes increased as the ages of the children dropped.

A total of 545 petitions were filed to sexually abuse girls under the age of thirteen.

378 petitions were filed to marry 10-year-old girls and younger.

While none of these petitions were approved, it’s important to remember that all of them represent at least one person in the United States petitioning the government to permit the sexual abuse of a child.

These statistics represent 1,102 cases of attempted child rape in which the child was either in the United States or abroad. Since these cases could not be happening without the parents, thousands of adults were involved in these proposed efforts to use the immigration system to rape children.

And yet these numbers are the inevitable outcome of our immigration system.

These numbers invariably bleed over into immigration from countries where child marriage is normal.

Child marriage is an inescapable part of Islam.

Mohammed married Aisha when she was six years old. While Mohammed had many wives and sex slaves, his sexual abuse of that young girl is the pillar[7] on which the empire of Islam was built.

In a tribal culture, Mohammed’s marriage to Aisha created a new familial alliance and expanded his power base. With his daughter’s sexual abuse, Aisha’s father was able to become the first caliph, succeeding Mohammed, and he ordered the assembly of the book that we know today as the Koran.

As long as child marriage remains a part of Islam, Islamic immigration will continue to be a vector for the sexual abuse of children in the United States.

Daniel Greenfield, a Shillman Journalism Fellow at the Freedom Center, is an investigative journalist and writer focusing on the radical Left and Islamic terrorism.

This article was published Januarly 17, 2019 by Frontpage Magazine and is archived at https://www.frontpagemag.com/fpm/2019/01/2000-muslim-child-marriage-immigration-cases-10-daniel-greenfield/
It is archived at Think-Israel at
http://www.think-israel.org/greenfield.childmarriages.html