ARABS HAVE DESTROYED 80% OF ARCHEOLOGICAL SITES IN JUDEA AND SAMARIA

”ARABS HAVE DESTROYED 80% OF ARCHEOLOGICAL SITES IN JUDEA AND SAMARIA’ 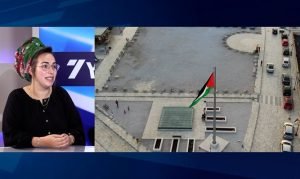 Jewish heritage sites in Judea and Samaria are being systematically vandalized and destroyed by local Arabs, according to a watchdog group which monitors archeological sites in the area.

Adi Shragai, operations organizer for the Shomrim Al HaNetzach organization, said in an interview with Arutz Sheva that the phenomenon of Arab vandals targeting archeological sites in Judea and Samaria has grown worse in recent years.

“Unfortunately, in the last few years we’ve received more and more reports from hikers and people in the field regarding the destruction of antiquities in Judea and Samaria, with no law enforcement. We understood immediately that something significant – and terrible – is happening here.”

Unlike archeological sites inside the pre-1967 Green Line, which fall under the direct protection of the Israel Antiquities Authority, sites in Judea and Samaria are under the authority of the Staff Officer of Archeology, an office in the Defense Ministry’s Civil Administration for Judea and Samaria.

Due to the office’s limited resources, Shragai said, enforcement of laws protecting archeological sites in Judea and Samaria has been lax.

“The Civil Administration isn’t enforcing the laws, so our goal has been the establishment of a Judea and Samaria division of the Israel Antiquities Authority.”

Large sites, such as Sebastia in Samaria, have been targeted by vandals, Shragai continued, with major sites destroyed or damaged, with some vandalized with graffiti. In some instances, the Palestine Liberation Organization flag has been raised over the sites.

During a recent tour with Communications Minister Yoaz Hendel (New Hope) of the Tel Arumeh site in the Shechem (Nablus) region in Samaria, for instance, it was discovered that a four-story mosque dedicated to terrorists, dubbed the ‘Martyrs’ Mosque’, had been built.

“In the middle of the tour with the minister, we saw how [the vandals] had levelled the top of the site, destroying antiquities.”

The site, which houses the ruins of a Hasmonean fortress, is also mentioned in the Bible as the home of Gideon.

Unfortunately, Shragai said, the damage is more the rule than the exception. A recent survey of 365 major archeological sites across Judea and Samaria found that some 80% had suffered either moderate or serious damage at the hands of vandals.

“This is a catastrophe for our national heritage. This is reminiscent of what ISIS does. Three-thousand years of Jewish history has been erased in just a short time. You can’t restore destroyed archeological sites.”

These are some of the comments that added useful information.