BLACK LIVES MATTER IN SCHOOLS ACROSS AMERICA: IT STARTS BY TEACHING YOUNG CHILDREN ITS MARXIST-BASED IDEOLOGY 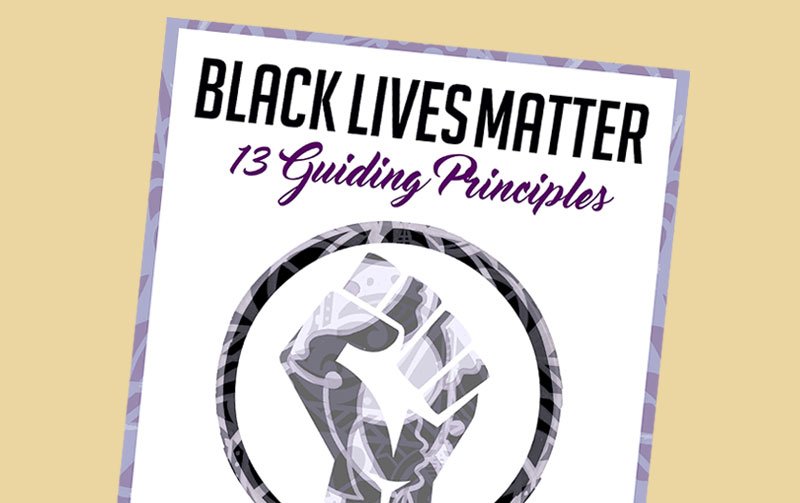 The starting point of the national Black Lives Matter curriculum is indoctrinating children with its Marxist “13 Guiding Principles.” Note the fist symbol – for revolution – implies violence.

When parents happen to watch their children’s Zoom classes and notice an offensive Black Lives Matter assignment or diatribe by the teacher during an academic class, they might assume it’s an isolated situation.

But in fact, the vast national and local Black Lives Matter (BLM) curriculum materials are very sophisticated and extremely well-planned. Their aim is to transform every child’s mind starting as young as possible. The BLM founders admit to being trained Marxists and LGBT activists — and the BLM ideology now flooding the nation’s schools fully reflects that.

Normal parents would want their young children told the truth that all people of all races have the same common humanity. They would not want them given the racist poison that one race is more “special” or “deserving” or “better” than the others. But there’s more to BLM than just that.

The starting point of the BLM curriculum is infusing children with their “13 Guiding Principles.” They are basically Marxist philosophy. These principles are drilled into the kids’ minds quite thoroughly.

The BLM 13 principles (based in Marxism) include.

Like all good Marxists, they dress all this up in “feel-good” sounding language on the surface. But that is just the starting point. Underneath the surface these “principles” are heavily refined and used consistently and to push the clear Marxist agenda that they were intended for.

These BLM Marxist principles are also presented differently depending on the age groups.

Here is the list devised for teachers and other adults: (See a larger version here.) 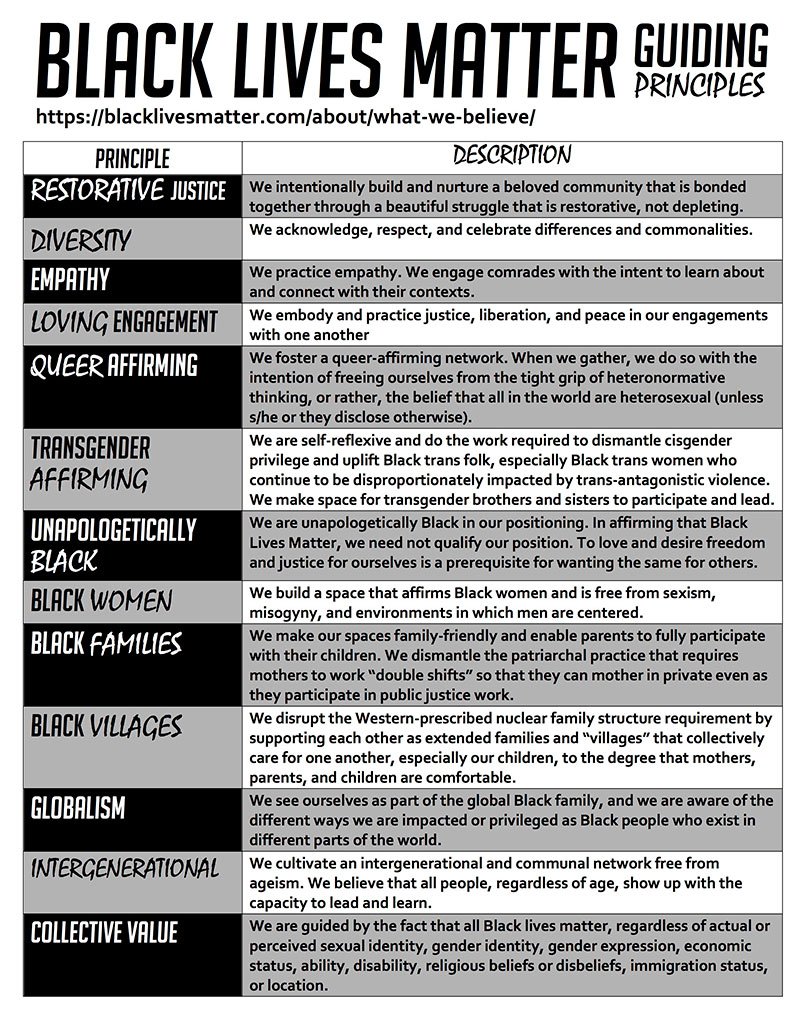 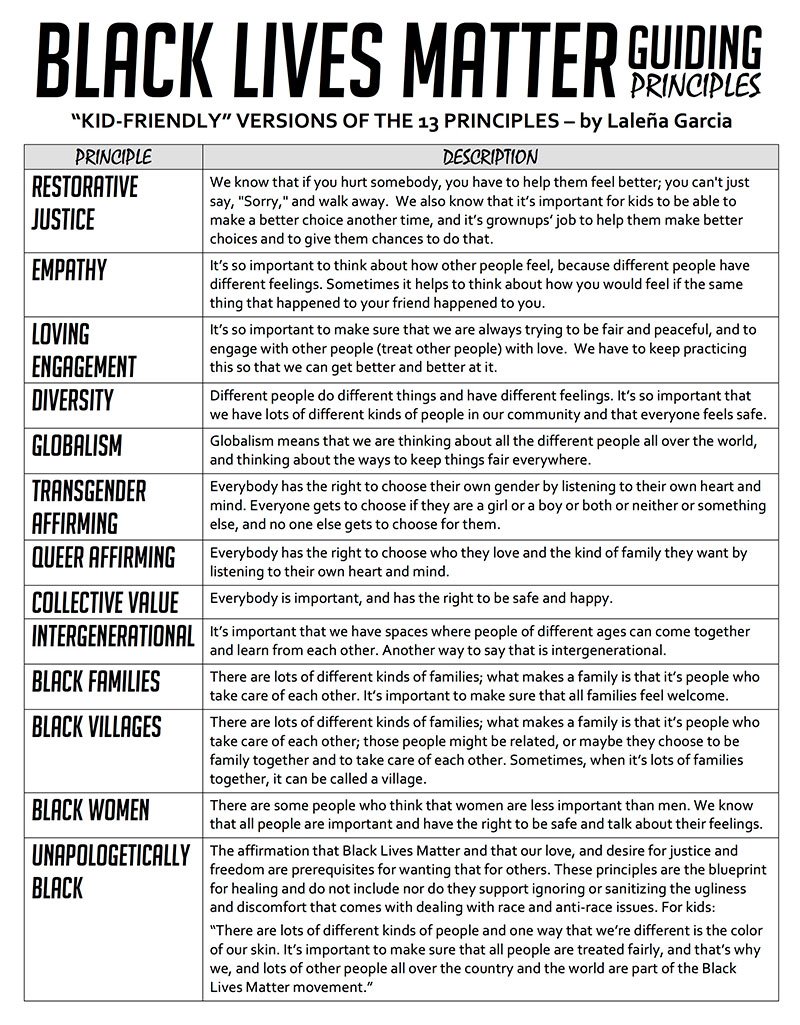 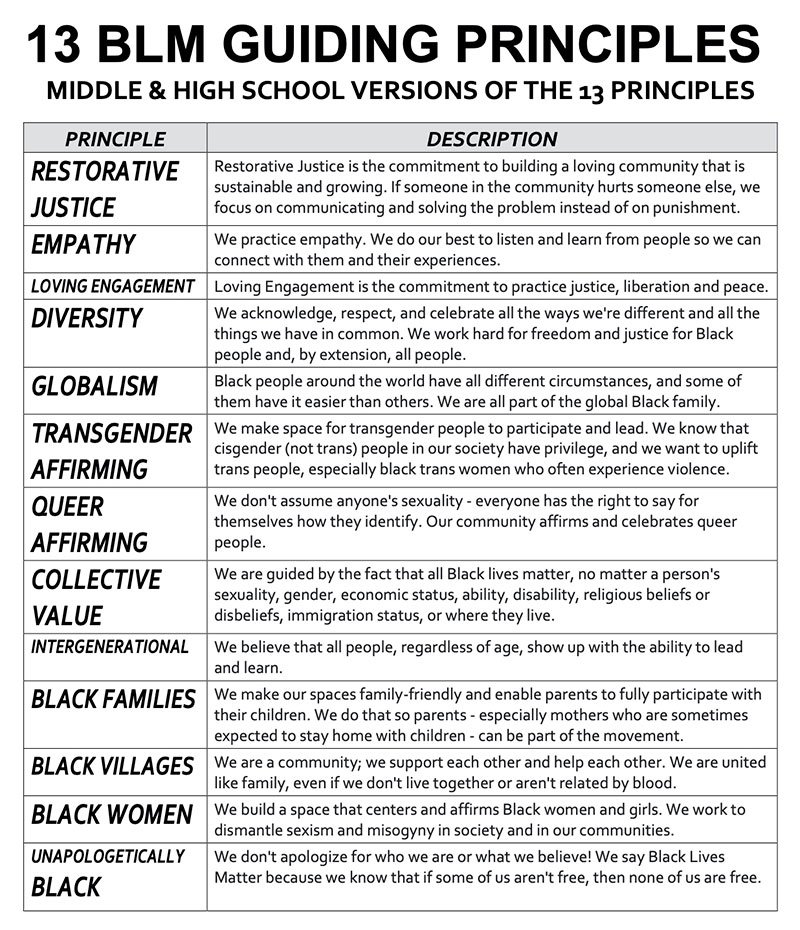 Once we start to look a little further in the curriculum materials, we can see where this is headed. The purpose is clearly to indoctrinate children in a larger, sinister Marxist ideology.

Black Lives Matter provides teachers a list of definitions of terms “to support your explanation of the 13 BLM principles.” These terms include: privilege, white supremacy, heterosexism, gender, cisgender, patriarchy, dismantle, and others. That’s what the “principles” are actually all about. 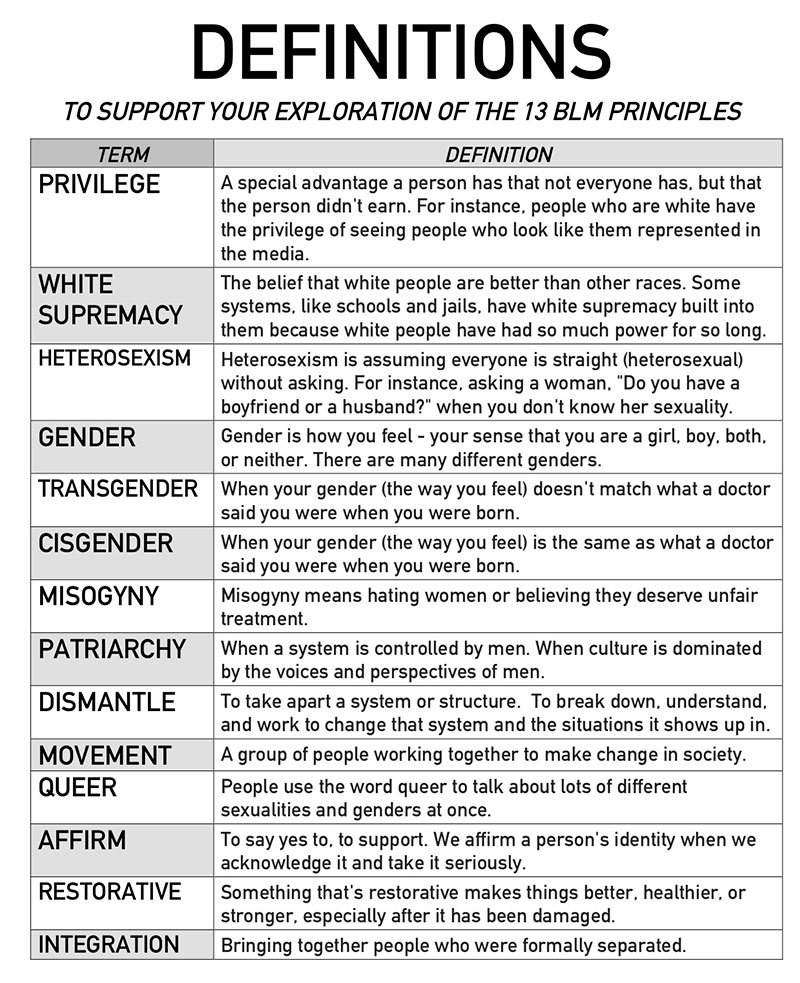 These are the terms being used to “refine” the principles in the minds of children. The purpose is clearly to create a generation of very radicalized, confused, and angry young people.

What can people do to stop this?

We are committed to helping people confront this across the country. But we can’t do it alone.

The first thing people need to do is become educated about what is actually happening. That is the purpose of this series of reports.

Beyond that, people need to find out what is taking place in their local schools. (Most people, particularly parents, are shockingly unaware of any of this — which is what the schools want!) And then they need to have the courage to confront it and force the local officials to stop it. MassResistance is on the ground, has decades of experience, and can help with all of that. We’ve shown over and over that a small number of dedicated and educated citizens can move mountains! 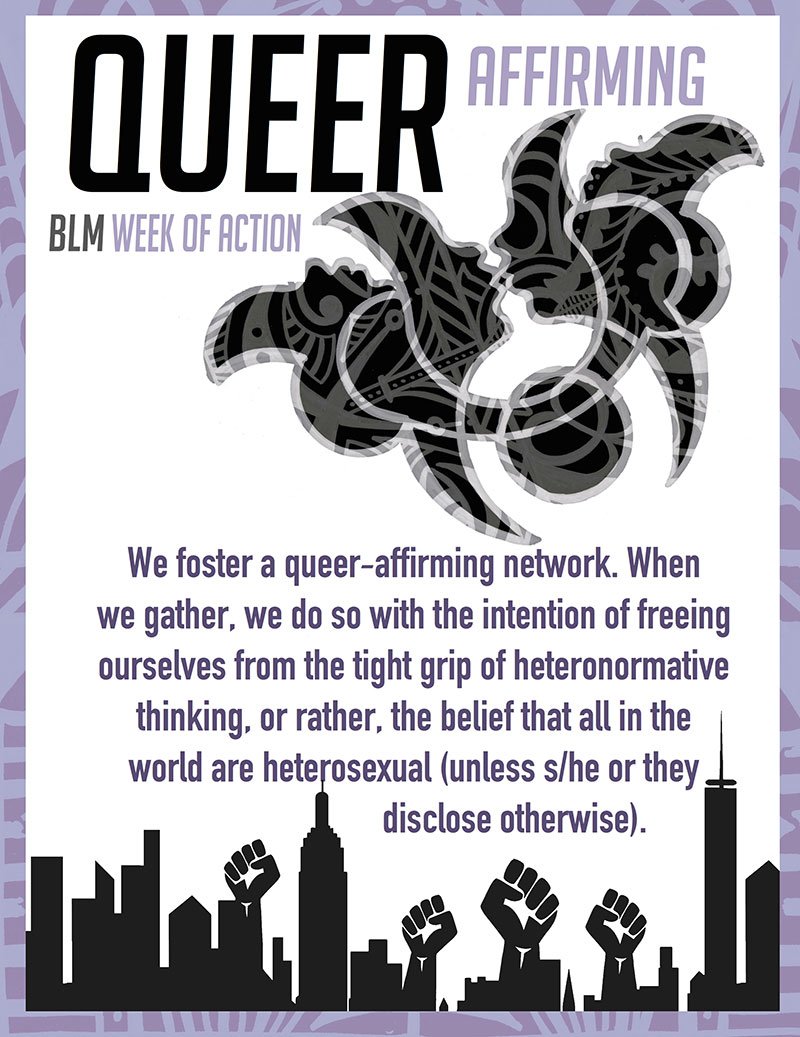 This is where “queer affirming” is leading children: “freeing ourselves from the tight grip of heteronormative thinking.” A parent’s nightmare!

“A leading pro-family activist organization, MassResistance provides the information and guidance people need to confront assaults on the traditional family, school children, and the moral foundation of society.” They point out that “too many pro-family groups want to be seen as ‘reasonable and ‘not extreme.’ They tend to ‘fight’ by writing commentary, re-posting shocking articles, and putting up a polite opposition to the latest left-wing lunacy. So they don’t accomplish much. But MassResistance focuses on exposing the harsh truths,” MassResistance has worked with activists in almost every US state and has offered guidance to activists in Australia, Canada, France, England, Ireland, Jamaica, the Virgin Islands, Finland, Ghana, Spain, Uganda, Nigeria, South Africa, Hong Kong, Singapore, Israel, New Zealand, Croatia, Brazil, and Chile.

This article was published by Mass Resistance, which promotes Pro-Family Activism. It is archived at
https://www.massresistance.org/docs/gen4/20d/BLM-Marxist-school-lessons/index.html
It is archived at Think-Israel at
http://www.think-israel.org/mass-resistance.blmschoolpropaganda.html

How dreadful are the curses

Re Israel’s irrevocable ownership of Israel