It isn’t really new news but it does show amazing gall that the media have portrayed Palestinian Arab aggressions against the Jewish State as all Israel’s fault. A sustained job of blaming the victim. Joshua Klein (here) writes of Caroline Glick’s anger at “congressional leftists and the left-inclined media for a recent wave of violent attacks against Jews, accusing the left wing and its lawmakers of hating the Jewish state and having ‘the blood of Jews’ on their hands, while blaming the media for ‘transforming America into an antisemitic state.’ “‘It’s pretty amazing that Hamas, a terrorist organization, attacked Israel with over 4,300 rockets and missiles and mortars in the space of 11 days,’ she said, adding that ‘Israel did not provoke Hamas at all.'” Glick is quite accurate. It is remarkable that the most of the global press have been able to portray Israel as starting the hostilities and perpetuating them. Standing firmly on this rock of balderdash, such epitomes of fairness as the U.N. Human Rights Council and “all of the bleeding hearts on all of the major networks in the United States …hate the Jewish State and .. blame it for the aggression that’s being perpetrated against it.”

AUTHOR: Joshua Klein is a journalist and an investigative reporter for Breitbart News, focusing on global politics.

This article was published May 31, 2021 by Breitbart News and is archived at https://www.breitbart.com/politics/2021/05/31/caroline-glick-blood-of-jews-on-hands-of-progressive-lawmakers-left-leaning-media/. 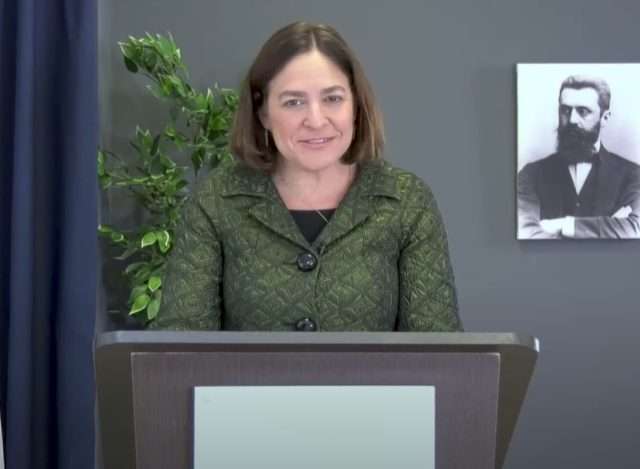 Appearing on Steve Malzberg’s weekly Sunday commentary show Eat the Press, conservative American-Israeli columnist Caroline Glick blasted congressional leftists and the left-inclined media for a recent wave of violent attacks against Jews, accusing the left wing and its lawmakers of hating the Jewish state and having “the blood of Jews” on their hands, while blaming the media for “transforming America into an antisemitic state.”

After Malzberg claimed the media “will always blame Israel and report the Palestinian propaganda,” Glick agreed.

“It’s pretty amazing that Hamas, a terrorist organization, attacked Israel with over 4,300 rockets and missiles and mortars in the space of 11 days,” she said, adding that “Israel did not provoke Hamas at all.”

Glick went on to blame the left and the media for why Israel is widely portrayed as the aggressor despite the actual circumstances:

And yet, Israel is now the subject of a new investigation at the U.N. Human Rights Council and, of course as you showed, it’s being pilloried by all of the bleeding hearts on all of the major networks in the United States because it’s just become the cause célèbre of the left to hate the Jewish State and to blame it for the aggression that’s being perpetrated against it.

“It’s just all about blaming the Jews,” she added, “it’s also what’s happening on the streets of New York and California.”

Malzberg then highlighted how UNRWA Gaza chief Matthias Schmale was pressured by Hamas to retract a statement in which Schmale told Israeli TV that IDF strikes on the Gaza Strip appeared to be “precise” and “sophisticated.”

In response, Glick noted how intimidating those who speak against the pro-Palestinian narrative is a common occurrence:

We’ve seen it all along: that a reporter or an official gets out from under the official narrative that ‘Israel’s evil’ and that it has to be blamed again for the aggression being perpetrated against it by Palestinian terrorists and other terrorist organizations in Lebanon, and of course all directed from Iran, and they say something true and they get into trouble.

Glick also noted how when two Israeli soldiers were lynched by a Palestinian mob in 2000, the Italian journalist who captured the brutality on film issued an apology:

Back in 2000 the Palestinians lynched, literally tore apart, two Israeli reservists that accidentally entered into the Palestinian town of Ramallah and they were butchered not only by the [Palestinian] police who they sought protection from but also by a mob of people that came into the police station to participate in their murder.

There was an Italian television crew there outside of the police station in Ramallah that was taping it and they got the footage out and it went viral obviously all over the world, and the guy — the journalist from RAI [Radiotelevisione italiana] the Italian broadcast network — he sent an abject apology to the Palestinian Authority, to Yasser Arafat who was then head of the PLO,, saying how much he supported the Palestinian people, because his life was in danger and they ended up having to ship him out of the country very quickly.

Addressing the U.N. Human Rights Council ordering an open-ended commission to look into possible war crimes committed by Israel during the latest conflict, Glick described its malicious nature. “The whole idea is just to keep an open war crimes investigation against Israel,” she said.

“It’s so that any time that Israel does anything at all to defend itself against aggression, that thing, whatever it is, is going to be the subject of a U.N. war crimes probe. The idea is to keep Israel constantly on trial.”

Glick then placed some of the blame for the radical incitement targeting Jews worldwide on President Joe Biden.

“Let’s just say very clearly that [President] Joe Biden is partially responsible for this,” she explained, continuing, “because [former President] Donald Trump took the United States out of the U.N. Human Rights Council because, like [former President] George W. Bush before him, [Trump] said this is an organization that is inherently antisemitic — it is dedicated to hating Jews.”

She went on to accuse the U.N. of hypocrisy, saying, “Aside from the absurdity that China that has concentration camps is now the head of the U.N. Human Rights Council — that in and of itself is insane.”

“But the fact is that the Biden administration enabled this because they legitimized this totally illegitimate, totally Jew-hating, totally bigoted organization, and they gave a tailwind to them to go ahead and attack the Jewish State, just by rejoining.”

Regarding the recent surge in antisemitic acts which has seen Jews attacked and hunted on the streets of the U.S. and around the world, Glick attributed the violence to both the media and congressional leftists:

I think that you have to divide responsibility for this, for inciting it, basically 50-50 between the media and the progressive lawmakers on the Hill, the Ilhan Omars and the Rashida Talibs that are the Muslim Brotherhood representatives in the U.S. Congress, and all of the ‘squad’ members who have been accusing Israel of being an apartheid state, an inherently racist state with no right to exist, that carries out war crimes every time that an Israeli breathes in and out.

“They incited it, this blood of Jews on the streets of New York City is on their hands,” she added.

Reiterating the negative role of the media, Glick blamed the false narratives being promoted by media sources for encouraging violent acts.

“But they’re sharing that blame with the U.S. media that’s been pushing this out with social media, that has been pushing out these blood libels against Israel,” she said:

Glick concluded by lamenting the new direction America has taken.

“This is something that the United States always distinguished itself from Europe, for its lack of — if you want to borrow a term from the left — a lack of systemic antisemitism and here they’re building systems that are based on it, like the U.N. Human Rights Council.” .

IN THE WAKE OF CLASHES BETWEEN ISRAEL AND THE HAMAS TERRORIST ORGANIZATION earlier this month, the past few weeks have seen a nationwide outbreak [1] of antisemitic threats and violence, with disinformation spreading on social media seen as a major cause, according to the Secure Community Network.

The radical U.S.-designated Islamic terror group, whose charter calls openly for the murder of Jews, launched over 4,000 terror rockets at Israel from the Hamas-ruled Gaza Strip over a period of 11 days this past month.

In a viral clip published [2] last week, documentary filmmaker Ami Horowitz approached students in Portland, Oregon, and managed to garner funds to support the Hamas terror organization despite openly presenting the group as determined to destroy Israel and kill Jews.

As a result of the recent uptick in antisemitic acts, Aaron Keyak, the Jewish Engagement Director at Biden for President, told [3] Jews to hide their Jewish identity publicly.

“[I]f you fear for your life or physical safety take off your kippah (head covering) and hide your magen david (star of David),” he wrote last Friday.

In a letter published [4] the previous week, more than 70 Harvard faculty members decried the U.S. and Israel’s “criminalization” of the Palestinians’ “right to resist” and called on the Biden administration to end support for “Israel’s apartheid regime, condemn Israeli state aggression, and affirm our support for the Palestinian liberation struggle.”

Meanwhile, Academy Award-winning actor Jon Voight posted [5] a scathing video last Sunday, blasting liberals for attacking Israel and Jews and demanding that people not be “fooled,” while warning that antisemites will “pay the price.”

During an appearance on Fox News Channel’s Hannity last week, conservative talker Mark Levin blasted [6] President Biden for the proliferation of antisemitism that Levin alleged was coming from the left and elected Democrats.