DEIR YASSIN: THERE WAS NO MASSACRE

Eliezer Tauber writes, “Deir Yassin is one of the founding myths of the Palestinian narrative, according to which Israelis murdered 254 people, committed rapes, and other gender-oriented atrocities in a peaceful 1948 Palestinian village.” In reality, as Tauber concludes from the very similar testimonies of those actually there, both Jewish attackers and Arab survivors, there was no massacre. Ironically, the massacre myth, created and promoted by the Arab leadership, boomeranged. Fear of a revengeful Israel helped swell the massive exodus of Arabs from the new state of Israel, thus, as Tauber writes, “creating the refugee crisis and fueling propaganda against Israel, which has shaped the worldâ€™s understanding of the affair to this day.” AUTHOR: From Times of Israel, “Professor Eliezer Tauber, a former dean in Bar-Ilan University, Israel, is an expert on the emergence of Arab nationalism, the formation of the Arab states, and the early phases of the Arab-Israeli conflict. He has published extensively on these topics.”

This article was published May 28, 2018 by Times of Israel (TOI) and is archived at https://blogs.timesofisrael.com/deir-yassin-the-end-of-a-myth/.

Deir Yassin: There was no massacre

by Eliezer Tauber,
A founding myth of the Palestinian narrative was a fabrication that drove thousands of Arabs to panic and flee 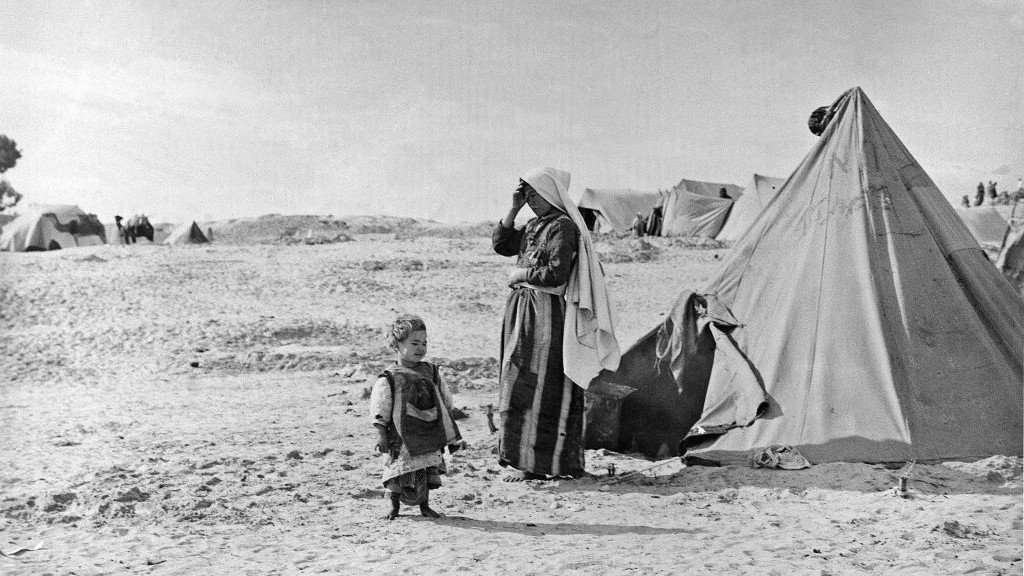 In this 1948 photo from the UNRWA archive, Palestinian refugees stand outside their tent in Khan Younis, Gaza Strip. (photo credit: AP/UNRWA Photo Archives)

Deir Yassin is one of the founding myths of the Palestinian narrative, according to which Israelis murdered 254 people, committed rapes, and other gender-oriented atrocities in a peaceful 1948 Palestinian village. For the past five years, I have carried out an in-depth research into the affair, learned to know the village, who lived there and where, their names, and above all, the exact circumstances of death of each of the people killed there. The results were astounding, but clear. There was no massacre in Deir Yassin. No rapes. Lots of unfounded Palestinian propaganda.

On 9 April 1948, combined forces of the Jewish Etzel and Lehi underground organizations attacked Deir Yassin, an Arab village west of Jerusalem. It was four months after the eruption of hostilities between Jews and Arabs in Palestine, and about a month before the termination of the British mandate and the establishment of the State of Israel. The nature of this attack became one of the most controversial issues in the history of the Arab-Israeli conflict, serving the Palestinians as a proof for Israeli inhumanity. For almost seven decades, an anti-Israeli biased literature described it as an intentional and deliberate massacre of defenseless Arab villagers, accompanied by rapes and other atrocities.

What really happened in Deir Yassin? Contrary to what one could expect, I found that the testimonies of the Jewish attackers on the one hand, and the Arab survivors on the other hand, were surprisingly similar, at times almost identical. My methodology, therefore, was to integrate the testimonies of both parties involved, Jews and Arabs, into one story. I relied on a vast number of testimonies and records from 21 archives (including Israeli, Palestinian, British, American, UN and Red Cross), many of them yet unreleased to the public, and hundreds of other sources. My findings were basically two: no massacre took place in Deir Yassin, but on the other hand, the false rumors spread by the Palestinian leadership about a massacre, rapes and other atrocities, drove the Palestinian population to leave their homes and run away, becoming a major incentive for the creation of the Palestinian refugee problem.

Deir Yassin was not the peaceful village many later claimed it to be, but a fortified village with scores of armed combatants. Its relations with the adjacent Jewish neighborhoods were troubled for decades and the Jews believed it to endanger the only road from Jerusalem to Tel Aviv, thus constituting part of the Arab siege of Jewish Jerusalem. Therefore, although later denying it for political reasons, the Jewish main militia in 1948, the Haganah, sanctioned the attack and later took part in it by means of its striking force, the Palmach.

A ten-hour fierce battle, in the presence of a civilian population, ended in the victory of Etzel and Lehi. No massacre took place. When the battle ended, the killing stopped. “I believe that most of those who were killed were among the fighters and the women and children who helped the fighters,” one of the Arab survivors was later to testify. Furthermore, the Arab villagers got an advance warning to evacuate the village, which 700 of them followed. The attackers took an additional 200 villagers prisoner and safely released them in Arab Jerusalem. Only 101 Arabs were killed, a quarter of them active combatants and most of the rest in combat conditions. The Jewish assailants also suffered casualties.

The Creation of the Palestinian Refugee Problem

For psychological warfare considerations, Etzel reported 200 Arabs killed, twice more than the actual number, enthusiastically adopted by the Palestinian leadership in Jerusalem, which increased it to 254 and added rapes and other gender-oriented atrocities. Hussein Khalidi, the senior Arab authority in 1948 Jerusalem, was of the opinion that, “We must make the most of this.” As his assistant Hazim Nusayba reported in a 1998 interview, Khalidi said “we should give this the utmost propaganda possible because the Arab countries apparently are not interested in assisting us and we are facing a catastrophe….So we are forced to give a picture – not what is actually happening – but we had to exaggerate.” Khalidi’s distortion of the facts failed to prevent catastrophe. Instead, it helped created one.

“Dr. Khalidi was the one who caused the catastrophe,” one of the Arab survivors ruled. “Instead of working in our favor, the propaganda worked in favor of the Jews. Whole villages and towns fled because of what they heard had happened in Deir Yassin.” The Palestinian leadership intended to exploit the affair to lay pressure on the Arab states to send their armies to Palestine to fight the Jews. The plan boomeranged. Following the rule that women’s honor comes before land, the moment the Palestinians heard about rapes they started to leave.

The horror propaganda about the affair has continued apace from 1948 to the present. The following is just a typical story, repeatedly cited, lately by the exiled Egyptian Muslim preacher, Yusuf Qaradawi: “As a climax of cruelty certain Jewish terrorists laid wagers on the sex of the unborn babies of expectant mothers. The wretched women were cruelly disemboweled alive, their wombs drawn out and searched for the evidence which would determine the winner.”

However, Palestinians and Muslim preachers are not the only ones who promote the massacre narrative, Westerners do as well. “Deir Yassin Remembered” is an organization founded in the United States, interested in building a memorial to commemorate the affair in a location overlooking the Yad Vashem Holocaust Remembrance Center in Jerusalem, apparently in order to draw an analogy between the two. The equation recurs in their writings, which argue that describing the massacre as “false, exaggerated, or in dispute” is tantamount to Holocaust revisionism. My research of the affair puts to rest any serious questioning of whether there was or was not a massacre at Deir Yassin. There was not.