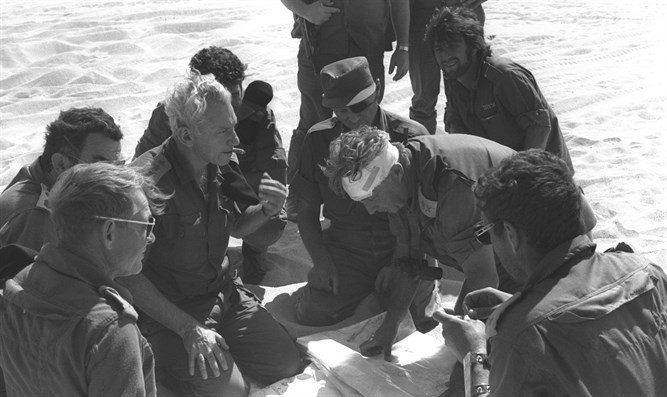 As noted here, newly opened state archives have enlarged our information about the Yom Kippur war of 1973, when Israel’s Arab neighbors again tried to destroy her, attacking on Yom Kippur, the day most Jews were in synagogue. Golda Meir, the then Israeli Prime Minister, was rightly pessimistic about the likelihood of obtaining much needed foreign aid. Her desperate plea to US Secretary of State Henry Kissinger was rejected, even though he was himself a Jew and understood the dangers that beset Israel. ‘They’ve thrown us to the dogs,’ she said. Shlomo Witty writes of some of the guesswork decisions that led to spectacular repulsion of the Arab aggressors.

AUTHOR: Shlomo Witty is a writter for Arutz-Sheva, Israel National News. His articles include many on ancient and recent Israeli history.

This article was published January 21, 2021 by Arutz Sheva and is archived at https://www.israelnationalnews.com/news/295351/.

The Yom Kippur war was launched on Yom Kippur, 1973, a day guaranteed to have most Israelis in the synagogue, not on alert. This article records “several consultations with Prime Minister Golda Meir show[ing] the decision making process as the war went on. 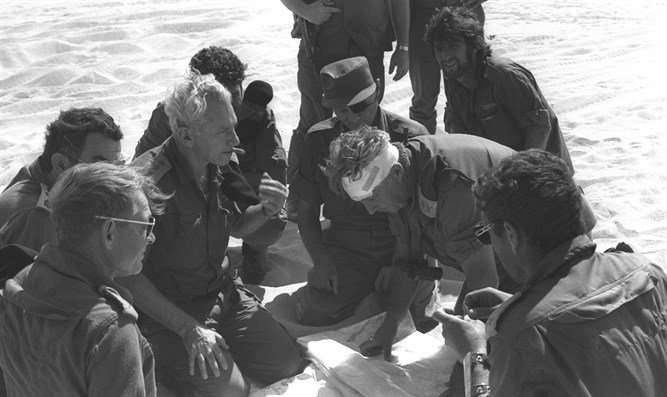 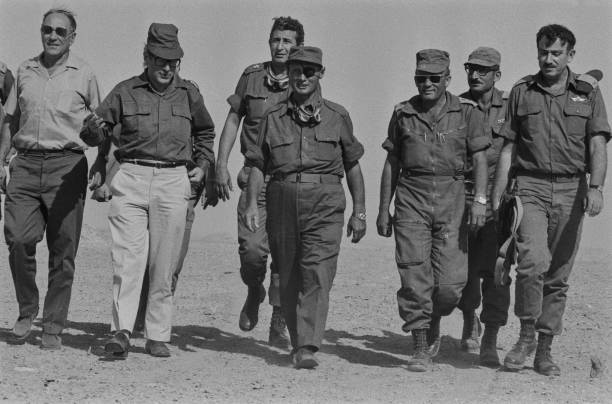 Moshe Dayan at the front, Yom Kippur War
The IDF Archives at the Ministry of Defense is continuing its historical project to expose the materials of the Agranat Commission and the Yom Kippur War. The new materials have been approved for disclosure by the government committee headed by retired Supreme Court Justice Prof. Yitzhak Englard and include minutes of 5 dramatic consultations held by Prime Minister Golda Meir.

Chief of Staff David Elazar: “We had a bad night. We held them off in the Canal a little better, but in were attacked in the Golan with large armored contingents. We lost 81, not including the Hermon post.”

Minister Yigal Alon: “We need to move forces out of inefficient positions. Should we bomb Damascus?

Chief of Staff: “Technically there is no difficulty in bombing the city, but they have yet to bomb our cities. I don’t want to be the first one to do so. ”

Prime Minister Golda Meir: “How did the troops in the north feel?

Chief of Staff: “It’s rough. They’re destroying plenty of armor, but there’s just no end to them.”

Defense Minister Moshe Dayan: “I had a conversation with the newspapers, they said it would be mind-blowing. Maybe I’m being optimistic, but it seems to me that they left feeling good.”

“We are now 4 km from the West Bank. The southern front opened up; we may need to evacuate it over time. Our forces came out of the “Budapest” post and found that the Egyptians were firing antitank rounds. Arik and Bern’s forces suffered some encounters but are currently positioned here. I actually expected the move southwards, so Shaike is handling it. We may have to retreat from Abu Rodes as well.”

PM: “Have you seen Kissinger’s reaction?”

Defense Minister: “Yes. It was interesting … I will not “kill myself” if they accept the call for a ceasefire without withdrawal. They will want to continue fighting.” 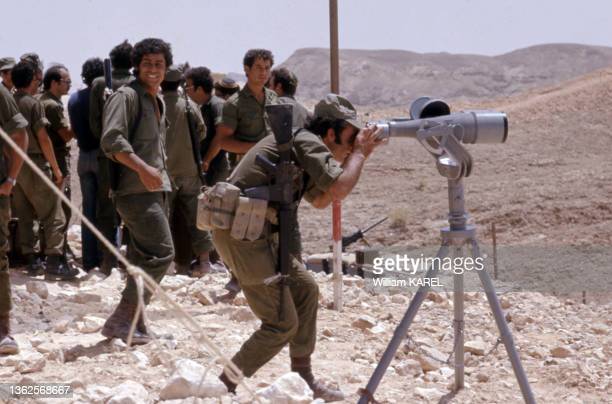 Israeli soldiers during the Yom Kippur War, October 1973. (Photo by William KAREL/Gamma-Rapho via Getty Images)
Defense Minister: “Arik is highly intelligent and a fighter. He says we have to cross the border. They did not do justice to Arik. If I thought he could do it, I would send him a congratulatory letter. If he could do it, while also leaving behind enough forces for defense… but I’m not one to speculate. Begin wants to cross the border? He should go towards Arik and move with him.

PM: “An explanation should be prepared immediately after the attack, in order to explain what happened and why.”

Defense Minister: “Regarding the fronts: Haka is not quite aggressive enough in the north. His troops are tired.”

PM: “If only it were possible, we should cross the border.”

Defense Minister: “They should say that we are entering Damascus.”

PM: “We need to capture it. It will fall eventually.

Defense Minister: “Today we assessed our air force. Benny says it will take three more days. We lost 56 planes and there are another 40 grounded. Yesterday we lost 13 planes. This is a worrying state of affairs. Benny says that we are finished in three more days, maybe four.”

Defense Minister: “In the Northern Command – Haka isn’t aggressive enough. Shadado will meet with the front echelon, together with Haka, not to overtake him, but to encourage him. They will be instructed to keep pushing. I can understand their outlook, but they need to move into the hills to improve our positions. The posts there cannot be abandoned.”

Defense Minister: “Tonight Gorodish called and said that all the outposts were gone. Today Gorodish told me to ignore that, and that there were between fifty and sixty soldiers at each outpost.”

PM: “I have a prediction that the decision of the majority in the Security Council will call for a withdrawal to the 1967 borders. America vetoed that, but now it’s on the background of a war. It’s more sympathetic. If America vetoes that, it will be harder for them to veto a ceasefire as is.

Defense Minister: “But I do not want to say that the war will end. We lack equipment, pilots, and more, quantitative problems. We can take the canal tomorrow, but with a great loss of human life “.

PM: “Do we have an indication that the Russians will give them more equipment?”

Defense Minister: “Absolutely, I think so. They ran out of missiles.”

PM: “If there is a ceasefire now, will our positions beyond the Suez Canal remain?”

Defense Minister: “I envy the thought of a ceasefire right now. This is the best situation now, and is better than any alternative we could find in the coming months.”

Defense Minister: “We need to talk about the Israelis abroad and the American volunteers that want to fight here. We can fly them here by the hundreds. We need to discuss all of this.”

Chief of Staff: “This is a decisive day of the war. We operated for 4 days according to a plan to counterattack into Syria, reach the ceasefire line, and move onward while the Egyptian attack is being held off. The question is whether we can reach a decision on this level – that is to say, can we reach Damascus? If we can take the approaches to Damascus, that will force a ceasefire and I can move between two hundred and two hundred fifty tanks towards Egypt. I propose that tomorrow we attack Syria all-out. Anwar el-Sadat President of Egypt. at Military HQ during the 1973 Arab-Israeli War. He is accompanied by Field Marshall Ahmed Ismail and General Al-Gamasi. The War of 1973 (Yom Kippur War. Ramadan War. or October War). was fought from October 6 to 25. 1973. by a coalition of Arab states led by Egypt and Syria against Israel. (Photo by: Universal History Archive/Universal Images Group via Getty Images)

General Israel Tal: “We have two fronts. On the Syrian front there is now no immediate military danger to us, after the damage they have suffered. They are unable to go on the offensive tomorrow and turn the tables. There is an immediate danger, from a purely military point of view, on the Egyptian front . We need to take care of the Egyptian front and be sure that we do not hold a bad position. I see the attack on Syria tomorrow as all or nothing. I do not think our situation today justifies such a gamble. I agree with the chief of staff that our credibility will be gone. If we don’t reach a turning point, then friends and enemies will come to the conclusion that the State of Israel is weak. Once there is such a conclusion, there is no doubt that the Arabs will want everything and not settle for little.”

Air Force Commander Maj. Gen. Benny Peled: “I must, before referring to the Air Force, point out fundamental logical errors in Talik’s thesis. We should go for Egypt and not Syria. I do not accept the assumption that a defeated Syria and a defeated Egypt will prevent Jordan from coming to the aid of the Syrians. The opposite is correct”.

PM: “I want to ask you something, not tactical. How many planes do you need to get, to make you feel better?”.

General Bnei Peled: “I can absorb twenty, even though I do not have reserve pilots for them.”

General Rehavam Zeevi: “We have the ability to move decisively only in the Syrian sector, not in Egypt. We also have no momentum; the troops are tired, and we do not have tanks. One or two more pushes, though, and we will have an experience like the Six Day War on the Syrian front.”

Minister Yigal Alon: “I would like to read the telegram that came from Dinitz: the Russians suggested to President Nixon to consider a decision to call for a ceasefire. I reacted immediately and sharply against such a move.”

Maj. Gen. Eli Zeira: “I have significant doubts that in the Middle East, there could be a situation here in which a country like Russia would easily agree, that one of its most important proxies would be eliminated as a regime. This isn’t just Israel against Egypt and Syria, but also the Soviet Union against the United States of America. This ceasefire is Russia’s attempt to preserve it’s regime – a ceasefire that will only come about if we advance on Damascus.

PM: “But a ceasefire, when part of Syria is in our hands, is a strong card to play against a ceasefire in Egypt.”

Chief of Staff: “It is better than a situation in which Egypt receives territories and we receive nothing”

Prime Minister: “I have lived from the beginning of the campaign with the feeling that we must not go out in a situation where the world will say ‘it’s over’. What we thought of Israel and the IDF is gone. Kissinger said so gleefully in the first conversation,” You have to win.” If we can make a reasonable strike against Syria, such that the Russians pressure them to accept a ceasefire, we will have accomplished something. If we can’t, we have lost something important. Don’t think I’m foolish – I’m talking about what is best.”

Prime Minister’s Summary: “The IDF is authorized to carry out a concentrated offensive effort in Syria tomorrow to destroy military formations and paralyze Syrian activity. There is no decision on the occupation of Damascus. “