HA’ARETZ IS AN ENEMY OF THE JEWISH PEOPLE 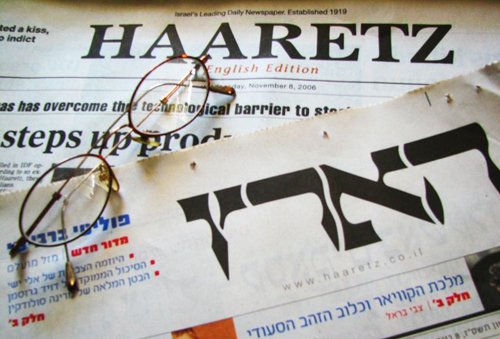 We’ve become accustomed to Israel being smeared and lambasted by foreign newspapers, but it comes as a shocker that Ha’aretz, a newspaper published in Israel, is as vile as they come. It plays the same role for foreign papers that citing a viciously anti-Jewish remark made by a (Jew-hating) Jew does. News media outside Israel need only quote Ha’aretz. Surely, Ha’aretz wouldn’t lie and distort information about its own country. Yah, right. As Victor Rosenthal writes, “Every day its writers present a slanted version of events in which Israel and Israelis are oppressors, occupiers, murderers, racists, thieves, and liars.” He carefully examines a situation that lays bare Ha’aretz’s distortions and straight-out lies.

AUTHOR: Victor Rosenthal is a writer whose subject matter is Israel, its friends and enemies. He writes much about Jew hate and the disastrous deals such as the Oslo Accords into which the desire for peace has led Israel.

This article was published by the Abu Yehuda Blog and was reposted July 4, 2021 by the Jewish Press.

It is archived at https://www.jewishpress.com/blogs/abu-yehuda/haaretz-is-an-enemy-of-the-jewish-people/2021/07/07/.

HA’ARETZ IS AN ENEMY OF THE JEWISH PEOPLE

Today, when Israel and Jews are under attack throughout the world, when international organizations have been turned into lie factories targeting Israel, when the Jewish State is accused of the very crimes – terrorism, murder, apartheid, genocide – that her enemies are either guilty of or aspire to, an Israeli newspaper, owned and operated by Jews, is a primary propaganda organ of those enemies.

Every day, the paper – which publishes both a Hebrew print edition that few Israelis read, and an English internet edition that is read around the world by decision-makers in governments and businesses – pumps out its vileness. Every day its writers present a slanted version of events in which Israel and Israelis are oppressors, occupiers, murderers, racists, thieves, and liars.

By virtue of its Israeli origin, this Stürmer gains credibility. Perhaps you don’t believe everything you read on Aljazeera’s website, but this is an Israeli newspaper; indeed, it’s been called the NY Times of Israel, the paper of record.

Today there is a typical example. In an editorial[1], they excoriate the Yamam, the Israel Police counterterrorism unit, accusing it of committing a “cold-blooded execution” of a man named Ahmed Abdu. They call it “Israel’s own death squad,” equating it with the ones operated by South American dictators.

Their accusation is based on a security camera video:[2] it shows someone in a car getting shot. That is all it shows. But let me quote the Ha’aretz editorial:

The footage and neighbors’ testimonies leave no room for doubt: Ahmad Abdu, 25, of the Amari refugee camp returned from a night out with friends. They dropped him off at his car. He entered the vehicle and started it, then a SWAT team emerged in a civilian car, blocking his way. Three Yamam police officers got out and shot at Abdu point-blank as he sat in his car. They then dragged him out, apparently to make sure he was dead, left him on the road and quickly left the scene.

The response by Border Police spokesman Tamir Faro to the incident is no less shocking and outrageous: He ignored the evidence in front of him and sufficed with the claim that the shooting was done “according to the rules of engagement.” In other words, the execution of an unarmed man in his car, while he’s not endangering or threatening a soul, in a deserted street doesn’t breach Yamam’s rules of engagement. Are we to deduce from this that this special unit is licensed to kill?

I can tell you exactly what it is possible to deduce from Tamir Faro’s statement, because I am personally acquainted with officers who serve in the Yamam, which is possibly the most competent police unit of its kind in the world, and their rules of engagement have been explained to me. I deduce that Abdu was not an unarmed man, because had he been unarmed, he would not have been shot.

It is true that the Yamam was charged to do targeted killings during the Second Intifada. They have not had such an assignment since then, and in any event, Ahmad Abdu was not important enough to be the subject of one. Recently the Yamam has arrested some perpetrators of high-profile murders, like the killer of Esther Horgan,[3] and (unfortunately, in my opinion) they were taken into custody unharmed. Abdu was wanted for questioning regarding a non-fatal shooting at a demonstration.

The explanation of why he was shot is found in the rules of engagement, which permit the officers to shoot if the suspect reaches for a weapon, points it at them, or opens fire on them. And this is undoubtedly what happened.

What is the “evidence” that Tamir Faro supposedly ignored? Is it in the video in which Abdu is not even visible until after he is shot? Is it in the statements of family members interviewed by Ha’aretz? The answer is that Ha’aretz has no evidence. Only those who were on the scene know whether Abdu was armed.

These are not rookie policemen who might have panicked. They are professionals who arrest dangerous terrorists night after night, and show great restraint, even when they are arresting someone who they know is drenched in Jewish blood. Why would they suddenly decide to “execute” a small-time terrorist?

The editorial is based on an article[4] over the weekend by Gideon Levy,[5] a specialist in blackening the name of Israel, the IDF, and the Israel Police. It was based on information provided by B’Tselem,[6] an extreme left-wing Israeli NGO dedicated to documenting “Israel’s regime of apartheid and occupation.” For this purpose, it receives more than US $3 million a year[7] from the EU, various European governments, the Ford Foundation, the New Israel Fund, the UN, and more.

Amos Schocken, the publisher of Ha’aretz is Israel’s modern day version of Julius Streicher,[8] who incited anti-Jewish hate in the Nazi newspaper Der Stürmer. Streicher was hanged for his crimes, but Schocken and his hatchet man Levy are careful to stay within legal boundaries, so they will probably not even be punished with a lawsuit.