“This is not what you would expect to see if this site is just a solid block of rock or an accumulation of random debris from a mudflow,” said one researcher. 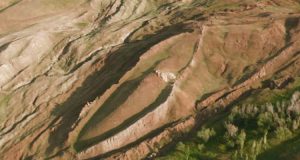 Researchers studying a boat-shaped formation in the mountains of Turkey have announced plans to conduct archaeological excavations at the site after new data suggests that the formation could be a man-made structure that appears to match the biblical description of Noah’s ark.

According to the researchers, ground-penetrating radar (GPR) surveys conducted at the “Durupinar site” in 2019 by Oregon-based Topa 3D show parallel lines and angular shapes, which are “strong indications of man-made construction,” between 8 and 20 feet below the surface.

“This is not what you would expect to see if this site is just a solid block of rock or an accumulation of random debris from a mudflow,” said Andrew Jones, a native of California who has been studying the site since the 1990s and now lives in Turkey to continue his investigations.

“But they are what you would expect to see if this is a man-made boat matching the biblical requirements of Noah’s ark,” he said.

In a statement released last month, the research group said the patterns unveiled by the GPR surveys appear to resemble rooms, possibly underneath a deck-like platform.

“I knew that the scientific consensus was that the Durupinar site is a geological oddity. Before learning about these scans, it seemed like those who continued to argue in favor of the Durupinar site just couldn’t accept the truth and let it go,” said Ryan Mauro, president of the Doubting Thomas Research Foundation.

“It’s a whole new ballgame now. Those judgments dismissing the site were made decades ago and based on limited data compared to what we have now,” he said.

Jones and Mauro, along with a team of Turkish scientists led by Dr. Fethi Ahmet Yuksel, are hoping to perform further scans of the site, collect core drilling samples, and ultimately conduct archaeological excavations to determine what really lies beneath the mysterious formation.

The group has already obtained a permit to begin their investigation and launched a website, NoahsArkScans.com, to increase public awareness and raise the necessary funds.

According the biblical book of Genesis, Noah’s ark came to rest on the “mountains of Ararat” after the great flood. The Durupinar site is located in the foothills of the Akyayla Mountain, about 32 kilometers (20 miles) south of the summit of Mount Ararat.

Next is a video entitled “Noah’s Ark Found?”
https://youtu.be/gjfH_Q4pQRI