J Street is an anti-Jewish, anti-Israel group that insists it is a Jewish organization; the New York Times (NYT) is a distributor of anti-Israel propaganda. I’m not sure that they still insist they print only news that’s fit to print. If they do, given their output, I wonder what they mean by ‘fit’. Stephen Flatow writes that the NYT reported that “the Israeli government advanced plans on Wednesday to build more than 3,000 new settlement units” in the West Bank. These largely involved apartments within existing communities, but calling them “settlement units” conveys a much more sinister image that sounds more menacing. It is a rhetorical trick and a rhetorical weapon to make Israel look bad when the facts alone won’t accomplish that objective. To make sure nothing cracked their shell game, J Street went further. They called Israel’s plan “settlement expansion.” During the past three decades, the Israeli government has authorized exactly one new settlement in the West Bank. Since 1992, the only Jewish construction authorized in the territories by a succession of Israeli governments has been within existing communities. While Israel is sacrificing availability of housing for Jews, the Arabs build where ever they want, whether it’s their land or not.

AUTHOR: Stephen M. Flatow is an attorney and the father of Alisa Flatow, who was murdered in an Iranian-sponsored Palestinian terrorist attack in 1995. He is the author of the book, â€œA Father’s Story: My Fight for Justice Against Iranian Terror.

This article was published November 2, 2021 by Jewish News Syndicate (JNS). It is archived at https://www.jns.org/opinion/j-street-and-new-york-times-revise-the-english-language/.

What is a “settlement unit”? You mean an apartment?

What do you do when the usual way of describing Middle East developments isn’t advancing your agenda fast enough? Well, if you’re J Street or The New York Times, you just revise the English language to suit your political purposes.

Israel announced last week that it has approved the construction of about 3,000 apartments and houses inside a small number of existing Jewish communities in Judea and Samaria.

But building some apartments within those towns doesn’t sound too ominous. So, Patrick Kingsley, the Jerusalem bureau chief of The New York Times, came up with a new, nonsensical term that makes apartments sound much more menacing than they really are: “settlement units.” 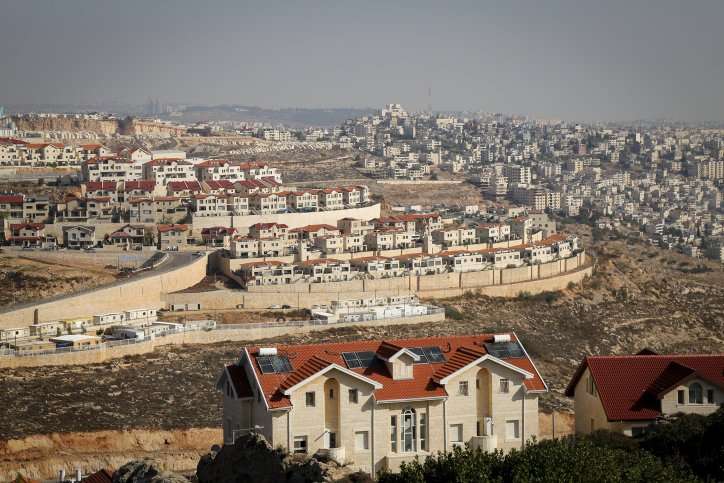 A view of the Dagan neighbourhood of Efrat (foreground) and Tamar neigbourhood (background) near the Palestinian town of Bethlehem. November 10, 2020. Photo by Gershon Elinson/FLASH90

“The Israeli government advanced plans on Wednesday to build more than 3,000 new settlement units in the occupied West Bank,” Kingsley began his lengthy article on Oct. 27.

“SETTLEMENT UNITS” IS A RHETORICAL TRICK and a rhetorical weapon. It’s a way of trying to make Israel look bad when the facts alone won’t accomplish that objective. It’s also a way of trying to energize Israel’s critics so they will immediately launch their own propaganda blasts.

And sure enough, the same day that the Times published Kingsley’s huge article about “settlement units,” J Street issued a press release denouncing Israel for its “plans to advance thousands of new settlement units throughout the West Bank.”

J Street also trotted out an additional rhetorical device, one they’ve used before: They characterized the Israeli decision as “settlement expansion.”

From that deceptive term, one would think that the settlements are spreading out further and further. Which is exactly what J Street wants the public to think—that those evil settlements are like a cancerous tumor, metastasizing and squeezing the Palestinian Arabs out of the region.

J Street doesn’t want you to know that the new apartments and houses will be built on land that already belongs to the State of Israel or to those Jewish communities. No Arabs will be displaced. Nobody’s land is being stolen. But acknowledging those facts would make it harder for J Street to incite the public against Israel; hence, the use of tricky language.

The U.S. State Department, which vehemently opposes Jews living in the heart of the ancestral Jewish homeland, is only too happy to play along with J Street and the Times. State Department spokesman Ned Price announced: “We strongly oppose the expansion of settlements … .” Nobody in the press corps bothered to ask Price how the construction of apartments within an existing community could qualify as the “expansion” of that community.

Down near the end of Patrick Kingsley’s very long article about “settlement units,” he also offered a deeply distorted version of the history of the settlements. Since 1967, Kingsley wrote, Israel has “permitted the construction of more than 130 Jewish settlements there.”

Technically, that’s true. But it’s so misleading that it borders on an untruth. Between 1967 and 1992, Israeli governments—Labor and Likud alike—built 129 of those 130 settlements. Since 1992, the Israeli government has authorized exactly one new settlement. One. In nearly three decades. And even that one exists only because Israel needed someplace to put the Jews who were expelled en masse from the Gaza region.

Why haven’t new settlements been built since 1992? Because that was when Yitzhak Rabin became prime minister and froze them. His successors—Shimon Peres, Benjamin Netanyahu, Ariel Sharon, Ehud Olmert, Ehud Barak, Netanyahu again, and now, Naftali Bennett—all continued that freeze. The only Jewish construction they have authorized in the territories in the past 29 years has been within the existing communities.

Israel’s prime ministers have imposed this unfair, one-sided freeze (notice that the Palestinian Authority never reciprocated by freezing Arab construction) out of the hope that the international community would recognize and appreciate Israel’s sacrifices.

No such luck. Not only does the world, including The New York Times and J Street, never appreciate Israel’s concessions, it actually pretends that Israel never even made them. Israel freezes settlements; the world says Israel is expanding settlements. Israel unilaterally withdraws from territory; the world says the territory is still “occupied.” The Palestinian Authority refuses to negotiate; the world accuses Israel of refusing to negotiate.

Which is why so many Israelis now believe that Israeli concessions are a waste of time. Because no matter how much Israel gives in, the other side demands more. No matter how many concessions Israel makes, the critics intensify the pressure, scream even louder—and now even change the English language in order to squeeze Israel even more.