‘LET THE STONES SPEAK FOR THEMSELVES’

As Roger Hertog writes, “… biblical archaeology [is] a subset within the larger field dating back to the 19th century, and somewhat controversial in that some of its practitioners have aimed to codify the authenticity of the Bible. In the process, its discoveries have indeed helped to validate the Jewish historic claim to the Holy Land, challenging those who see modern Israel as a nation of interlopers.” What has proven challenging is identifying structures that some say conform to Biblical descriptions and others deny the connection. For example, conventional thinking asserts David and his predecessor Saul were not kings as described in the Bible but “tribal chieftains” with hilltop strongholds. So when Eilat Mazar, who was not strongly religious, uncovered the remains of a 3000-year old stone structure she identified as King David’s Palace, many denied the possibility. ‘Gedaliah son of Pashhur’ and ‘Jucal son of Shelemiah’, names mentioned in the Bible as hearing the words of Jeremiah were found on 2700-year old seals at the dig. Besides the tunnels under the complex, intricate wall designs also add credence, but many continue to deny Mazar’s claims. They might be right but possibly they talk this way because they are committed politically to denying that the Jews have lived in Judea a very long time and that the Bible is historical evidence of this. The verdict is still not in, but look at https://www.youtube.com/watch?v=3sRaY8zv3Xc, a delightful reconstruction of what might have been.

AUTHOR: Roger Hertog is vice chairman emeritus of AllianceBernstein LP, president of the Hertog Foundation, and past chairman of the Tikvah Fund.

This article was published August 10, 2021 by Israel National News and is archived at https://blogs.timesofisrael.com/let-the-stones-speak-for-themselves/

‘LET THE STONES SPEAK FOR THEMSELVES’

Eilat Mazar offered me a chance to help link the Bible to modern times. It was one of my best investments 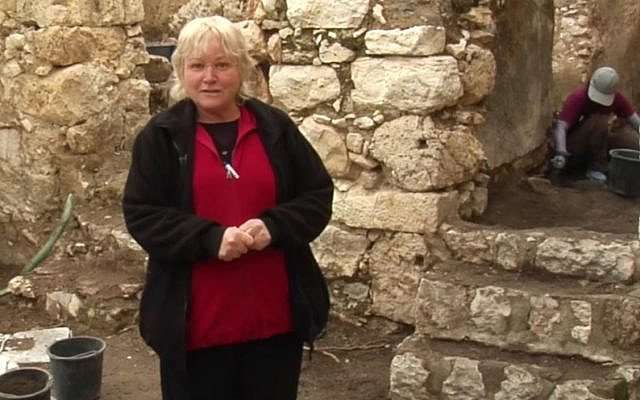 The first time I heard the name Mazar was shortly after the Six-Day War, as a participant in a UJA-Federation mission to Israel. We met with a variety of leaders in government, academia, and business. But my introduction to Benjamin Mazar, at the time head of the archaeology department at the Hebrew University of Jerusalem, stands out, having captured my imagination as a 29-year-old Zionist, naturally drawn to the state of Israel because of my parents’ experience fleeing the Nazis in the late 1930s.

In the immediate aftermath of the reunification of Jerusalem, Benjamin had the enviable task of exploring areas of Jerusalem that had been off limits to Jews for centuries. He was a fabulous storyteller with an intricate knowledge of the Bible and gave us a tour of several sites where he hoped to uncover artifacts.

It was a transformative experience to tour East Jerusalem with someone who could point to where the Romans were encamped millennia ago, as if he were present at the time.

Little did I know that some 30 years later Benjamin’s granddaughter, Eilat, would present me with the opportunity of a lifetime: A chance to connect modern day Israel with the ancient kingdom of David inscribed in the book of Prophets.

I didn’t then fully understand the implications of biblical archaeology, a subset within the larger field dating back to the 19th century, and somewhat controversial in that some of its practitioners have aimed to codify the authenticity of the Bible. In the process, its discoveries have indeed helped to validate the Jewish historic claim to the Holy Land, challenging those who see modern Israel as a nation of interlopers.

Some archaeologists have argued that David and his predecessor, Saul, were merely “tribal chieftains” with hilltop strongholds rather than kingdoms, thus relegating the Jews of that era as just one of the nomadic groups in the region. What made Eilat such an eloquent person was that she never engaged in a real conflict with any of them. She would only say “Let the stones speak for themselves.” Time and scholarship will tell the story.

After Benjamin’s passing in 1995, Eilat, who had learned at his side, was ready and able to continue his work. Like him, she was not devoutly religious, but she felt a strong connection to the Bible as a blueprint to Israel’s ancient past.

In the early 2000s, she was devoted to finding the Palace of King David in Jerusalem, a “holy grail” of sorts among renowned archaeologists and historians searching for clues to the significance of the era. Benjamin had been supportive of her vision and contributed insights to her research, focused on the excavation in the City of David area, adjacent to the Western Wall and Temple Mount and bordering the Arab village of Silwan.

Plans to excavate the area faced skepticism among Eilat’s peers, as well as financial, logistical, and bureaucratic hurdles. The Eldad Association, the authority in charge of the area, planned to build a visitor center right where Eilat wanted to dig. She had long worried that the pace of construction in the area would render the project impossible.

After a potential funding source fell through, I learned of the dilemma through Dan Polisar via my role as a board member of the Shalem Center, where Eilat was a senior fellow. Fortunately, I was in a position to offer help, and soon met with Eilat in the United States. She brought with her extensive documentation, unfurling her maps and drawing from the encyclopedia of biblical history in her mind.

She was convinced that a passage in the book of Samuel contained clues to a palace in the northern part of Jerusalem’s oldest area. She was also inspired by the work of British archaeologist Kathleen Kenyon, who in the 1960s discovered in that area what she believed to be a wall built by King Solomon dating to the tenth century B.C.E.

“The Bible tells us that Hiram of Tyre (who would later help King Solomon build the Temple)[1] constructed the palace for David,” Eilat later wrote in an article[2] in the Biblical Archaeology Review (BAR). “King Hiram of Tyre sent envoys to David, with cedar logs, carpenters and stonemasons; and they built a palace for David” (2 Samuel 5:11). [3]

When I inquired of Dan Polisar about other archaeologists’ theories, I learned that most said Eilat’s views were fanciful, and that her dig would be a waste of time and money. Some said the area in question had been nothing more than a grazing area for sheep.

But Eilat was a force of nature. If her grandfather had a passion for biblical archaeology, Eilat not only shared it but added to it conviction and an inability to be deterred. I decided to but place my bet with Eilat Mazar.

After a visit to see the site firsthand, my wife, Susan, and I agreed to underwrite the project. I recall standing at the visitor center and trying to imagine that “somewhere beneath this Coke machine could be David’s Citadel!” In 2005, the Eldad Association agreed to the dig in hopes of adding to the site’s historical appeal.

Eilat’s enthusiasm was contagious. Sure enough, her team from the Hebrew University of Jerusalem, where she was a professor, quickly began to unearth treasures. I recall the first excited call in which she reported artifacts from the fourth to seventh century B.C.E, including one bearing the name of Yehuchal, a figure mentioned in the biblical book of Jeremiah. At that point we agreed to double our investment.

“Almost from the start, ancient remains, preserved beyond all expectations, were unearthed,” Eilat wrote in BAR. “Surprisingly, I felt very much at ease throughout the entire excavation. Perhaps what helped me most was the recognition of the importance of what we were doing… I would let the stones speak for themselves.”

In August of 2005, Eilat announced her belief that what would come to be called the Large Stone Structure, in close proximity to the Stepped Stone Structure excavated by Kenyon decades earlier, was part of King David’s palace. She argued that the two sites were once part of a single complex, and that it made sense that the palace might be outside the protective walls of Jerusalem due to the city’s increasing expansion.

Here’s how Eilat later addressed the skeptics in BAR.

“Did King David, now the ally of the Phoenicians, renowned for their building capabilities, authorize them to build a magnificent new palace for him outside but adjacent to the northern boundary of the old Canaanite city, shortly before the construction of the projected new Temple to its north?

“The Biblical narrative, I submit, better explains the archaeology we have uncovered than any other hypothesis that has been put forward. Indeed, the archaeological remains square perfectly with the Biblical description that tells us David went down from there to the citadel. So, you decide whether or not we have found King David’s palace.”

Even the naysayers welcomed her contributions. As noted in a 2005 article in The New York Times, “Other scholars who have toured the site are skeptical that the foundation walls Eilat Mazar has discovered are David’s palace, but they acknowledged that what she found was rare and important — a major public building from around the 10th century B.C.E. with pottery shards that date from the time of David and Solomon…”

Israel, and indeed the global archaeological community, lost one of its shining lights on May 25 of this year, when Eilat succumbed to illness at the too-young age of 64.

While she was never 100-percent certain in her theories, her courage drove her to push for the answers. Her work inspired not only Jews but others, including U.S. policy makers, who believe in the ancient Jewish ties to the Holy Land.

I last spoke to Eilat a few months before she died. She never mentioned she was ill. She did speak of her satisfaction with all she had accomplished. Although her time was relatively short, she lived the life she most desperately wanted, and had a career coveted by many of her peers.

Her work will live on through The Roger and Susan Hertog Center for the Archaeological Study of Jerusalem and Judah at the Hebrew University.[4]

Susan and I are proud to support the Center, so that future Eilat Mazars can pursue their dream of linking the past and the present, to ensure the Jewish state’s future.