Israeli researchers are finally discovering how and why the Dead Sea Scrolls ended up in Qumran. Tom Metcalfe writes about Dr. Daniel Vainstub’s explanation, based on an ancient Hebrew document that was hidden in Cairo some 1,000 years ago. Vainstub believes that the annual meeting of some 3000 or more members of the Sect from communities all over the country took place in Qumran, because it had the requisite enormous ritual bath and sufficient water reservoirs. Vainstub says also that one of the Qumranic documents, the Damascus Document, contains the rules and regulations applicable to the annual gathering. He suggests they brought scrolls to and took scrolls from Qumran at these annual meeting. It would certainly explain why such a large well-equipped place showed little or no sign of people living there full time in an ordinary community.

Dr Vainstub has written a scholarly article detailing his theory entitled The_Covenant_Renewal_Ceremony_as_the_Main_Function_of_Qumran”; it is available at https://www.academia.edu/50851440/

AUTHOR: Tom Metcalfe is a freelance journalist and regular Live Science contributor who is based in London in the United Kingdom. He writes mainly about science, space, archaeology, the Earth and the oceans.

Daniel Vainstub is at Ben-Gurion University in Beer Sheva, Israel in the Department of Bible, Archaeology and Ancient Near East. Contact him at vainstub@bgu.ac.il/.

This article was published September 27, 2021 by Life Science and is archived at https://www.livescience.com/medieval-damascus-document-dead-sea-scroll-mystery/. 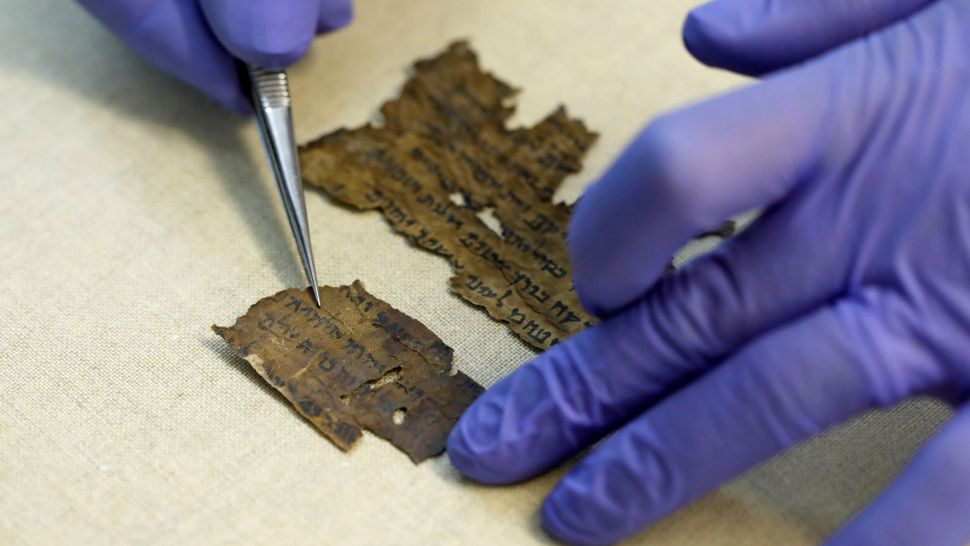 An ancient Hebrew document created more than 1,000 years ago and stashed away in Cairo may unlock a secret of the Dead Sea Scrolls.[1]

Scholars of the scrolls have long wondered why so many fragments of the mysterious manuscripts â€” more than 15,000 pieces of more than 900 original documents â€” were hidden in caves around Qumran, in the hills of the Judean Desert just west of the Dead Sea in Israel,[2] seemingly far from any major settlements.

The nearby archaeological site of Qumran itself also presents similar mysteries. For instance, why was its pantry so well-stocked, with more than a thousand pottery storage vessels and hundreds of bowls, plates and cups â€” but excavations show very few people ever lived there? What was the purpose of a large open-air terrace called the “southern esplanade” in Qumran, and why is it walled off from a nearby cemetery? And why were Qumran’s many ritual baths, or “miqva’ot,”so large?

This video is titled “The Two Fragments Reunited.” https://cdn.jwplayer.com/previews/hV5NPnX4

Now, research suggests Qumran was in fact the site of a huge annual ceremony of the mystical Jewish sect of the Essenes, in which its members gathered from cities and rural communities all over Israel to observe a key ritual known as the Covenant of Renewal. Qumran’s peculiar construction, the researchers suggest, reflects this ceremonial function. Fragments of the Dead Sea Scrolls also mention a festival that seems to be referring to the same gathering of the Essenes, the researcher said.

According to the new theory, many of the Dead Sea Scrolls themselves could have been written by Essene communities throughout the country and brought to Qumran at the time of the annual festival to study and be stored there.

“The countrywide gathering in Sivan [the third month of the Jewish calendar, which falls inMay or June] was a large and well-regulated event for which clear and detailed rules were established,”Daniel Vainstub, an archaeologist at Ben-Gurion University of the Negev, told Live Science. “All this fits the archaeological remains of the site.”

In a new study, published online at the end of July in the journal Religions,[3] Vainstub argues that Qumran was the location of this annual gathering based on a version of the rules of the religious community contained in what’s called the Damascus Document or Damascus Covenant.

The Damascus Document â€” so-named from its numerous references to the city in Syria, possibly because Damascus was once ruled by Israel’s King David â€” was copied from an earlier Hebrew source in about the 10th century A.D. It was eventually stored in the Cairo Genizah, a storeroom adjoining a Jewish synagogue in Fustat, the original Arabic capital of Egypt that eventually became a southern neighborhood of the city of Cairo.

Destroying any text that contains God’s name is forbidden in Jewish religious law, even accidently, and any documents from Cairo’s Jewish community were ultimately stored in the genizah just in case, at least until they could be formally buried.

As a result, writings accumulated over many centuries in the Cairo Genizah; and in the 1890s, Cambridge University scholar Solomon Schechter visited the site[4] and found a a trove of hundreds of thousands of ancient manuscripts, including Hebrew religious texts, as well as works in several languages on art, literature, philosophy and science. 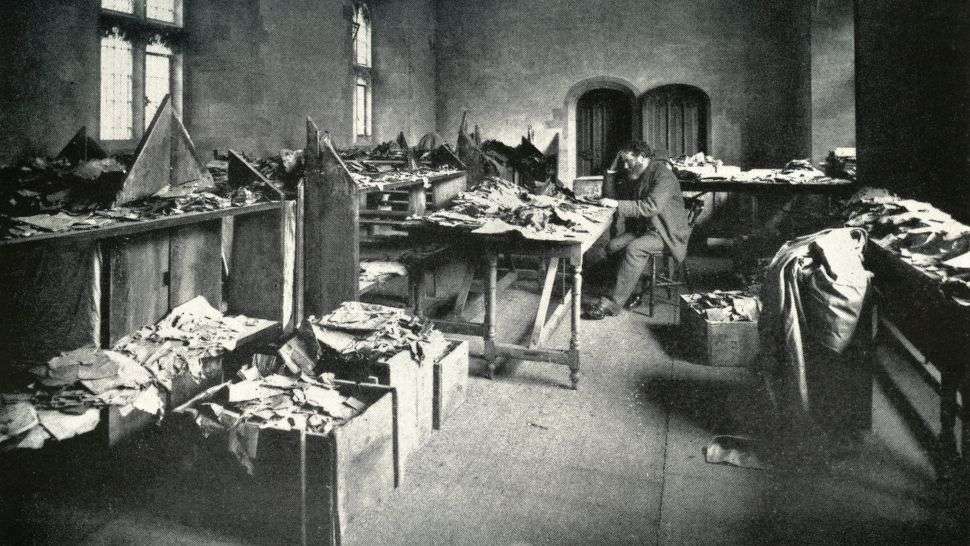 The most complete versions of the Damascus Document were found in the genizah, and fragments of it have since been found among the Dead Sea Scrolls themselves.

And according to Vainstub, the version from the genizah in Cairo contains a fuller description of a ceremony referred to in the Dead Sea scroll fragments, which was misunderstood until now. The Cairo Geniza description suggests Qumran was the site of an annual gathering in the month of Sivan, when the holiday of Shavuot is observed to mark the renewal of the Jewish covenant with God.

“I argue that the Damascus Document contains the bylaw or rule that regulates the annual gathering,” Vainstub told Live Science in an email. “No one noticed this before me.”

The passage in question in the Damascus Document refers to the Torah â€” the first five books of the Hebrew Bible â€” and reads: “And all [the inhabitants] of the camps shall assemble in the third month and curse anyone who deviates either to the right [or to the left from the] Torah.”

Vainstub suggests the “camps” were Essene religious groups scattered throughout Israel, often as isolated rural communities but also within major cities. He argues the passage shows that a gathering took place at a specific time, and that people from different places were called to convene in one site.

Previously discovered archaeological evidence suggests the ancient complex at Qumran would have supported relatively few members of the sect for most of the year, but the new text suggests it swelled to host several hundred people at the time of the annual gathering.

“Some dozens of permanent residents of Qumran â€¦ had to host many hundreds of people at the site once a year in ever-increasing numbers,” Vainstub wrote in the study. “The site of Qumran, with its facilities, caves and surfaces, accords with the evidence for the annual gathering that emerges from the scrolls.”

The pilgrims who stayed at Qumran only for a few days did not need to be regularly housed, Vainstub wrote; instead, they may have slept in the open or in one of the many caves in the area â€” such as the caves where the first fragments of the Dead Sea Scrolls were found in 1947.

Vainstub’s proposal explains why the public buildings at Qumran, such as its pantry filled with crockery and storage vessels, were large enough to serve thousands of people, but no evidence of them has ever been found. He argues that the adjoining southern esplanade was an outside eating area that had to be walled off from the nearby cemetery to maintain religious purity; and his theory also explains the large size of the numerous ritual baths at the site, which were an essential part of Jewish worship at that time.

The idea that the Essenes gathered at Qumran once a year might also explain the location of the scrolls, as the sect members may have left their religious writings there in the caves that they slept in, Vainstub wrote. “My theory is also consistent with the fact that the scrolls did not necessarily originate from Qumran, but rather were brought to the caves from all over the country and left in the caves over the decades.”