ISIS and al-Qaeda leaders, Abu Bakr al-Baghdadi, Osama bin Laden and Ayman al-Zawahiri, all started out as members of the Muslim Brotherhood (MB). They left to join more exciting, overt terrorist groups, but, as Raymond Ibrahim points out, “… when all is said and done, the Brotherhood’s patient and incremental methodology has proven far more effective than the outright jihad of its terroristic offshoots.” Almost thirty years ago, MB wrote out how they would wage jihad from within the USA (see here). They called what they would be doing as the ‘Civilization-Jihadist Process.’ They described their work in America as a kind of grand jihad to eliminate and destroy Western civilization from within, “‘sabotaging’ its miserable house by their hands and the hands of the believers…” They would use coalition, conversion, absorption and cooperation; they would unify and direct Muslim efforts. They would continue to create front organizations to infiltrate particular parts of society. Their single goal was to gently ease (their word was ‘settle’) Islam into American society. Islam would eventually become rooted. As they wrote, “That Islam is resident and not a passing thing; rooted “entrenched” in the soil of the spot where it moves and not a strange plant to it”. They aren’t in for a sudden kill. They work to spread their civilization deeply and broadly in the USA, without alarming the populace. They are confident that ultimately it will become ingrained and intrinsic to American culture. It is certainly true that they have had great success infiltrating our media and our educational, judicial, financial and political systems. 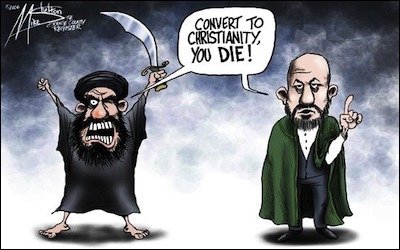 Islamists who adopt patient and incremental tactics have been far more effective than armed jihadists.

What do Abu Bakr al-Baghdadi, Osama bin Laden and Ayman al-Zawahiri—that is, the late leader of ISIS, and the late and current leaders of al-Qaeda—have in common? That they’re among the world’s most notorious Islamic terrorists? Yes, but there’s something else, something more subtle, that binds them: they all began their careers as members of the Muslim Brotherhood, the oldest and most widespread political Islamic organization in the world.

In a 2014 video interview,[1] Sheikh Yusuf al-Qaradawi—a spiritual leader of the Brotherhood whose Al Jazeera program on shari’a is watched by tens of millions of Muslims—asserted that “this youth [al-Baghdadi] was from the start among the top ranks of the Brotherhood, but he was inclined to [positions of] leadership and so forth… Then, after he spent years in prison [for Brotherhood activities] he came out and joined with them [the nascent Islamic State],” eventually becoming first “caliph.” (I first discussed[2] this Qaradawi video soon after it appeared in 2014; predictably, YouTube has since taken it down,[3] though Arabic[4] websites still have it.)

In response, Egyptian Minister of Religious Endowments (awqaf), Dr. Muhammad Mukhtar Gom’a had said that “Qaradawi’s confession [concerning al-Baghdadi] confirms that the Brotherhood is the spiritual father to every extremist group.”

Al-Baghdadi, bin Laden and al-Zawahiri all began their careers with the Muslim Brotherhood.

So it would seem: In a 2012 video,[5] Ayman al-Zawahiri, current leader of al-Qaeda, said of his friend and predecessor that “Sheikh Osama bin Laden was a member of the Muslim Brotherhood in the Arabian Peninsula,” during his youth and in the 1980s.

As for al-Zawahiri himself, his involvement with the Brotherhood in Egypt, where it was founded in 1928, is especially well known. Indeed, he wrote an entire book about it, The Bitter Harvest: The [Muslim] Brotherhood in Sixty Years (which first surfaced around 1991; translated portions appear in The Al Qaeda Reader).[6] The book is dedicated to demonstrating how and why the Brotherhood had lost its way by choosing to participate in elections instead of waging jihad against the “apostate” government of Egypt.

What’s noteworthy here is that al-Baghdadi, bin Laden, and al-Zawahiri all agreed with the overall vision of the Muslim Brotherhood—unsurprisingly so, considering the latter’s motto is “Allah is our objective. The Prophet is our leader. The Koran is our law. Jihad is our way. Dying in the way of Allah is our highest hope.”

What the three jihadist leaders had grown frustrated with is the Brotherhood’s patient and nonviolent approach—its willingness to compromise Islam (including jihad) in order to “play the game,” as it were. Consider what al-Zawahiri, who had joined the Brotherhood when only fourteen years old, before abandoning it for more militant groups, wrote in Bitter Harvest:

[N]ot only have the Brothers been idle from fulfilling their duty of [waging] jihad, but they have gone as far as to describe the infidel governments as legitimate, and have joined ranks with them in the jahiliyya [infidel-style of] governing, that is, democracies, elections, and parliaments. Moreover, they take advantage of the Muslim youths’ fervor by bringing them into their fold only to store them in a refrigerator. Then, they steer their onetime passionate Islamic zeal for jihad against tyranny toward conferences and elections.

Interestingly, when all is said and done, the Brotherhood’s patient and incremental methodology has proven far more effective than the outright jihad of its terroristic offshoots. Despite Zawahiri’s grumblings from the early 1990s, and after decades of grassroots efforts, the previously banned Brotherhood won Egypt’s 2012 elections, with one of its members, the late Muhammad Morsi, becoming the nation’s first democratically elected president.

Unlike ISIS, the Brotherhood remains alive and well, particularly in the U.S.

Of course, a year later Egypt revolted against the Brotherhood, which found itself again labeled a terrorist organization. Even so, the Brotherhood remains alive and well, particularly in the United States of America. According to a 1991 Muslim Brotherhood document[7] written in Arabic and presented as evidence in the 2008 Holy Land Terror Funding Trial, the Brotherhood’s purpose in America is to wage a soft and subversive jihad[8] of attrition; in the Brotherhood’s own words:

The process of settlement is a “Civilization-Jihadist Process” with all the word means. The Ikhwan [members of the Muslim Brotherhood] must understand that their work in America is a kind of grand jihad in eliminating and destroying the Western civilization from within and “sabotaging” its miserable house by their hands and the hands of the believers.

All of these Brotherhood front groups remain alive, well, and highly influential in America[9] —and therefore pose a greater long term and subversive threat for the security of the United States than ISIS, al-Qaeda, or any other jihadi organization.

Raymond Ibrahim is a Judith Friedman Rosen Fellow at the Middle East Forum.

This article was published November 14, 2019 by FrontPage Magazine and is archived at
https://www.meforum.org/59924/muslim-brotherhood-subversion-vs-jihadist-rage
It is archived at Think-Israel at
http://www.think-israel.org/ibrahim.muslimbrotherhoodsubversion.html