Akiva Van Koningsveld discusses how Arab identity is defined by themselves and the foreign press. He writes, “Keeping in line with the theory of intersectionality, sociologists over the last decades have increasingly stressed the value of the self-definition of identity as a tool of empowerment. Contributors to newspapers, like The New York Times, have argued that it is crucial for minorities to “negotiate racial identities that reflect our heritage, culture, and experience, which includes how others perceive us. Why, then, when it comes to Arabs in Israel are international news outlets seemingly intent on defining their identity for them?” The rest of his article contains some facts and history about Israel’s population. It is very unlike what the NYT and the Muslims in the US Congress would like you to believe. But then again, if ignorance of the facts, thanks to NYT and others, were not wide-spread, Arabs such as Mahmoud Abbas couldn’t get away with pretending the ‘Palestinian” Arabs go back to the ancient Canaanites.

AUTHOR: Akiva Van Koningsveld left The Netherlands for Israel in the fall of 2020. Before joining the Honest Reporting team, he worked as a policy officer at the Center for Information and Documentation Israel, a Dutch organization dedicated to combating antisemitism and spreading awareness of the Arab-Israel conflict. He graduated from Utrecht University with a law degree, focusing on the intersection of human rights and civil liability.

This article was published October 6, 2021 by Honest Reporting. and is archived at https://honestreporting.com/newsflash-media-israels-arab-minority-does-not-largely-identify-as-palestinian/.

Keeping in line with the theory of intersectionality, sociologists over the last decades have increasingly stressed the value of the self-definition of identity as a tool of empowerment. 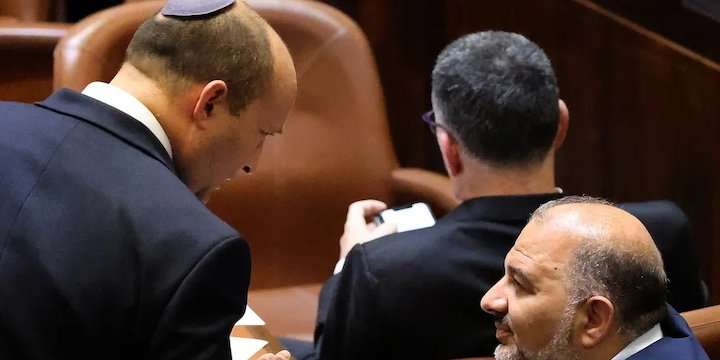 Prime Minister Naftali Bennett speaks with Mansour Abbas, leader of the Islamist party Raam at the Knesset in Jerusalem, June 13, 2021. (Emmanuel Dunand/AFPKeeping in line with the theory of intersectionality,[1] sociologists over the last decades have increasingly stressed the value of the self-definition of identity as a tool of empowerment. Contributors to newspapers, like The New York Times, have argued[2] that it is crucial for minorities to “negotiate racial identities that reflect our heritage, culture, and experience, which includes how others perceive us.”

Why, then, when it comes to Arabs in Israel are international news outlets seemingly intent on defining their identity for them?

For example, in recent reporting on the crime wave[3] in Arab-majority towns in Israel, BBC Middle East correspondent Tom Bateman described[4] these localities as “Israel’s Palestinian towns.” Outlets like the NYT,[5] The Washington Post[6] and NBC News[7] have also referred to the country’s largest minority as “Palestinians in Israel.” So have high-profile individuals such as US Congresswoman Ilhan Omar [8] and Human Rights Watch’s[9] Ken Roth [10]

This depiction of Arab Israeli identity not only runs counter to the facts on the ground — Arabs are granted equal rights and are citizens of the State of Israel, not of a non-existent “Palestine”[11] — but also disregards that the vast majority of them do not self-identify as “Palestinian.”

Rather, data shows that they consider themselves primarily “Israeli Arab” or simply “Israeli.”

INDEED, EXPERTS HAVE STARTED TO NOTICE that deepening integration into Israeli society is impacting the way Arab Israelis view themselves. The Pluralism Index,[12] compiled by the Jerusalem-based Jewish People Policy Institute, last year recorded a sharp decline[13] in the number of people in Israel who consider their primary identity to be “Palestinian.”

The 2021 elections brought Arab parties and voters closer to full-partner status in the Israeli political game. This is also likely an outcome of processes noted in last year’s Index, where we reported a dramatic rise in the percentage of Arab Israelis who define their primary identity as “Israeli,” and a correspondingly steep drop in the percentage of those who identify as “Palestinian.” (2021 Pluralism Index) [14]

According to the survey, 51 percent of non-Jews in Israel said they identified as “Arab-Israelis,” compared to just 7 percent who said that they primarily viewed themselves as “Palestinian.” Additionally, just under a quarter of non-Jews described themselves as simply “Israeli.”

The survey also asked respondents to rate how much they agree with the phrase “I feel like a real Israeli.” Most Arabs responded that they either agree completely (65%) or somewhat agree (33%) with the statement.

A similar study from 2017 [15] by Shaharit, an Israeli NGO committed to fostering coexistence, found that only 14.6 percent of Arab Israelis self-identified as “Palestinian.”

Yet, some activists are all too keen to group Israel’s largest minority with their Arab Palestinian brethren in the West Bank and the Hamas-controlled Gaza Strip. Israeli Arab Yoseph Haddad experienced this first hand over the summer when he confronted a woman that insisted on labeling him as Palestinian against his will: 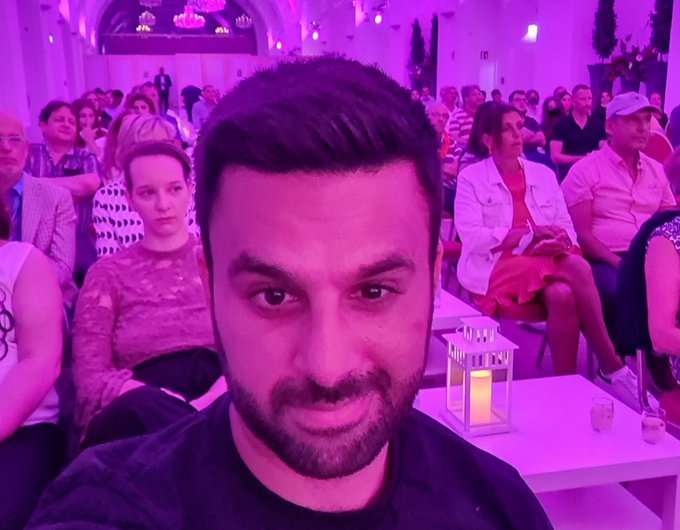 The current state of the complex relationship between Israel and its Arab population can only be fully understood through the lens of history. Although Jews have always maintained a presence in the Holy Land since the destruction of the Second Temple[16] (70 CE), Christian and Muslim Arabs have also lived in the region for hundreds and hundreds of years. In fact, the Al-Aqsa Mosque, Islam’s third holiest site, was built on the ruins of the Jewish Temple following the Muslim conquest of Jerusalem in the seventh century.

However, for these non-Jewish residents, the concept of a national “Palestinian” identity did not exist.[17]

To quote[18] Faiz El-Khouri, the first Syrian representative to the United Nations (1947):

I think most of you, if not all, know that Palestine used to be a Syrian province. Geographical, historical, racial and religious links exist there. There is no distinction whatever between the Palestinians and the Syrians and, had it not been for the Balfour Declaration and the terms of the [British] mandate, Palestine would now be a Syrian province, as it used to be.”

In the wake of the Second World War and the horrors of the Holocaust, Jewish immigration to Mandatory Palestine soared. In 1948, on the eve of Israel’s independence, the then-British-administered territory between the Mediterranean Sea and the Jordan River was home to some 630,000 Jews, in addition to over one million Arabs.

A year earlier, the United Nations had voted to partition Mandatory Palestine into separate Jewish and Arab states and establish Jerusalem as an international city under UN auspices. Jewish leaders accepted the proposal, but the Arab Higher Committee rejected all compromises. This was followed by attacks on Jewish communities and neighborhoods.

As British forces left in May 1948, David Ben-Gurion officially proclaimed the creation of the State of Israel, prompting Egypt, Jordan, Syria, Lebanon and Iraq to invade the new Jewish state. What followed was the deadliest war in Israel’s modern history, which formally ended with a series of armistice agreements in 1949.

By the end of the conflict, there were some 160,000 Arabs residents in Israel. Historian Benny Morris later noted[19] that Ben-Gurion had no “a priori intention to expel the Arabs, and during the war there was no policy of expulsion.” Nevertheless, many left their homes — either responding to Arab leaders’ calls or to protect themselves from advancing armies. In some cases, Arabs were forcibly displaced by Jewish fighters.

Nevertheless, Israel’s Declaration of Independence[20] called upon “the Arab inhabitants of the State of Israel… [to] participate in the upbuilding of the State on the basis of full and equal citizenship and due representation in all its provisional and permanent institutions.” Ben-Gurion’s appeal echoed statements from earlier Zionists like Ze’ev Jabotinsky, who is quoted[21] as saying that the territory of “Eretz Yisrael [the Land of Israel]” is suitable for “a million Arabs, for a million of their descendants, for several million Jews – as well as for peace.”

Today, there are 1,956,000 Arabs in Israel, accounting for 21.1 percent of the total population.[22] While Israel, like every democracy, has its shortcomings and challenges, it is reasonable to say that the vision of Israel’s founding fathers has been actualized. For instance, members of the Arab minority hold posts in all branches of government — from the Knesset[23] to the Supreme Court — as well as influential positions in the spheres of culture, media, sports, etc…

One does not need to search long before finding recent examples of Arab Israeli success stories. In June, Ra’am (United Arab List) leader Mansour Abbas made history[24] as his Islamist party signed a coalition deal to sit in the government. Barely a month later, Intel Israel appointed its first Arab Israeli vice president.[25]

Arab Israelis also played a significant role in the successful capture of Palestinian terrorists who escaped from Israeli prison in September. According to police sources, “dozens of Arabs” phoned in sightings of the dangerous fugitives, eventually leading to their arrest. “Everywhere they turned, Arab citizens refused them and called police,” Public Security Minister Omer Barlev commented at the time. “Much respect to all the responsible citizens!”

However, Israel’s social cohesion can be fragile. During May’s 11-day Hamas-initiated conflict, Arab rioters carried out what have been described as “pogroms” [26] in Lod, Acre, Jaffa, Haifa and other so-called mixed communities. Jews also targeted Arabs in several attacks. But in a move that showcased overriding Arab-Jewish cooperation, Mansour Abbas subsequently vowed[27] that Arab Israelis would “lead” efforts to repair synagogues damaged in the violence.

Despite intermittent, albeit not particularly unique, difficulties, most Arabs in Israel view themselves as members of society. While this might not fit the malicious narrative[28] of Israel being an “apartheid” state, the facts speak for themselves.

Actually, Israel’s Arabs have spoken for themselves — and the media should be responsible enough to listen to them and report accordingly.