The Muslim Brotherhood is not just antithetic to Western countries but also to Muslim states that wish to remain sovereign. Yoram Ettinger writes, “President Biden is about to reembrace the Muslim Brotherhood in the mold of the Obama/Biden Administration in defiance of all pro-US Arab countries, which consider the Muslim Brotherhood a clear and present, existential terrorist threat.” He points out that the Brotherhood’s core ideology is to establish a “universal Islamic society; replacing Western global domination and submitting itself to Allah and the Quran, while rejecting/toppling all national (Muslim and non-Muslim) regimes via politics, violence and martyrdom.” The Brotherhood has a veneer of non-violence. It may seem to conform to western ideas of political administration. In reality, it holds firm to its vision of a universal adherence to sharia law, with Islam as the religion to which all must conform. Nevertheless, the current Biden administration seems to see only the veneer. This is unlikely to help stabilize an already unstable Middle East.

AUTHOR: Ambassador (ret.) Yoram Ettinger is an international speaker, writer and commentator. He, can be read at The Ettinger Report. He is author of “Second Thought: a US-Israel Initiative.”

This article was published February 11, 2021 by Israel National News and is archived at https://www.israelnationalnews.com/news/296643/.

The Muslim Brotherhood has worked hard at obfuscating the West through its 2-pronged operation: political and subversive. And Biden? Op-ed. 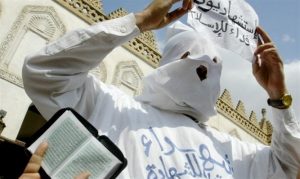 President Biden may benefit from the following advice, provided by Sir John Jenkins, a top British specialist on the Muslim Brotherhood, political Islamism and the Middle East, and former Executive Director of the British International Institute for Strategic Studies – Middle East branch: “[The West] should resist the temptation to seek to understand the Muslim Brotherhood through our own cultural or epistemological [knowledge] categories…. [Jenkins cautions against] viewing the world through lenses ground by an exclusivist Western modernity, shaped in the distorting crucible of European nationalism….

“Islamism – to which the Muslim Brotherhood is central – like other totalizing, anti-rational and authoritarian ideologies is a profound ideological challenge to the modern Western conception of the rational state and its foundational principles….”

Engaging or Confronting the Muslim Brotherhood?

Moreover, will they recognize the centrality of the Muslim Brotherhood’s track record and its core ideology, which highlight the grand design of establishing a universal, non-corrupt Islamic society; replacing Western global domination and submitting itself to Allah and the Quran, while rejecting/toppling all national (Muslim and non-Muslim) regimes via politics, violence and martyrdom?

However, the Muslim Brotherhood has been very skillful in obfuscating the West through its two-pronged operation: the political screensaver and the operational (subversive and terroristic) engine. The latter determines the strategic vision and its execution, while the former facilitates diplomacy, politics and fundraising.

Yet, President Biden’s policy-makers contend that Islamic terrorism is generally driven by despair, and that the Muslim Brotherhood and its multitude of Islamic organizations are non-violent, political in nature and seeking justice, human rights and freedom.

This policy is articulated in a document, published by the Carnegie Endowment for International Peace, which reflects the State Department worldview, and was headed until recently by CIA Director William Burns.

The 2021 policy towards the Muslim Brotherhood is consistent with President Carter’s 1978/79 policy towards the exiled Ayatollah Khomeini, who was perceived as a peaceful political dissident, oppressed by the Shah of Iran. This facilitated the Ayatollahs’ rise to power, stabbed the pro-US Shah in the back, and transformed Iran into a global epicenter of anti-Western and anti-Sunni terrorism and a proliferator of non-conventional military technologies.

This worldview has led the Biden team to assume that Iran’s Ayatollahs – irrespective of their consistently ruthless track record – are credible negotiators; potential partners for peaceful-coexistence and

influence-sharing with their Sunni Arab neighbors; amenable to ending domestic repression and disavowing their fanatical, megalomaniacal, religious vision. Furthermore, the Biden team assumes that waiving the US military option constitutes a prerequisite to constructive negotiation with the rogue Ayatollahs.

President Biden’s team played a key role in the initiation and formulation of the 2015 nuclear accord with Iran (JCPOA). In 2021, it aspires to rejoin the accord with some modifications.

The same team co-led the 2009 embrace of Egypt’s Muslim Brotherhood, while abandoning the pro-US Mubarak on the grounds of the latter’s poor record in the areas of human rights and democracy. This provided a tailwind to the Muslim Brotherhood’s subversion throughout the region – supported mostly by Turkey’s Erdogan and Qatar – and eroded US credibility and its posture of deterrence among all pro-US Arab regimes.

In 2021, the Biden team seems to adhere to the same policy, serving Egyptian President Sisi notice because of human rights violations, while courting the Muslim Brotherhood.

The human rights-driven policy towards the Muslim Brotherhood was at the core of the 2011 US-led military offensive against Libya’s Qadhafi, which was actively supported by the current Biden team. It led to the disintegration of Libya, and dramatically worse violations of human rights, along with the transformation of Libya into a platform of civil wars and global Islamic terrorism.

According to Sir John Jenkins (ibid), “[The Muslim Brotherhood] continues to threaten the constitutive basis of most contemporary Muslim majority states…. Islamists are revolutionary in a fundamental sense of the word. And the history of the modern Middle East tells us that revolutions destroy. Some may still be tempted to hope that when a malign or otherwise unsatisfactory regime is overthrown the subsequent trajectory must be progressive. [Middle East] experience suggests the reverse. As Hannah Arendt said nearly 50 years ago,

“The practice of violence, like all action, changes the world, but the most probable change is to a more violent world.” Authoritarianism is not weakened in such circumstances: it recurs….

“The Muslim Brotherhood, the first and foundational mass movement of mobilized Islamism, launched by Hassan Al Banna in the Egyptian provincial city of Ismailiyya in March 1928…. Al Banna may initially have conceived of Jihad as primarily one of social transformation through preaching and persuasion. But, he soon came to promote ‘fann al mawt’ – ‘the art of death.’

He urged his followers to scorn life; claimed that ultimate martyrdom could only be attained through death in the service of the divine; articulated a doctrine of armed physical force; contemplated a frontal attack on power; and allowed the creation of a paramilitary force and violent attacks – including assassinations – against the Egyptian government…. On top of this, the writings of Sayyid Qutb – its most significant and protean ideologue – remain central to Brotherhood thinking everywhere and continue to be used to justify multiple forms of Islamist violence.

“More generally, [the Muslim Brotherhood’s] Political Islamism… rejects most existing political systems as un-Islamic. It seeks to replace the secular with a new Islamized order nationally and internationally. The Brotherhood… gives little space to the tolerance, choice and individual freedoms we claim to value.

It has no commitment to democratic choice as the fundamental expression of a political community. It rejects what we consider to be the self-evident legal equality of individuals regardless of gender or religion. It is constitutively antisemitic and homophobic; its approach to education and societal cohesion is unlikely to promote inclusivity; it seeks power first….”

Will President Biden and his national security and foreign policy team leverage – or disregard – Sir Jenkins’ unique analysis of the Middle East, in general, and the Muslim Brotherhood, in particular?

Will they persist in their attempt to subordinate the intrinsically perfidious, despotic, intolerant, violent and unpredictable Middle East to noble core Western values?

Ambassador (ret.) Yoram Ettinger, a popular inernational speaker, can be read at The Ettinger Report. He is author of “Second Thought: a US-Israel Initiative.”