THE MUSLIM BROTHERHOOD MUST BE CONFRONTED

Tawfik Hamid urges that the Muslim Brotherhood (MB) be declared a terrorist group, if we are to retain our American civilization. Middle East countries such as Saudi Arabia, Egypt and the UAE have already done so. They have seen MB in action and know MB is not moderate; it is regressive and works to put all countries around the world under Sharia dominance. Even Hamas, itself a violent terrorist branch of the MB tree, has announced it has broken away — but MB still supports it through cutouts. Qatar, with the help of MB, has used terror groups effectively against Middle East countries that can compete with Qatar in selling natural gas to Europe. Turkey was living in the modern era for many years, until Recep Erdoğan, a MB supporter, gained control and is moving Turkey back to the 7th century; he is capable of helping carry out the MB desire to flood Europe with Muslims. The MB is as hostile to Egypt and Saudi Arabia, who have been straying away from strict Koranic fundamentalism, as it is to European democracies. On the whole, MB may claims it is moderate and indeed has peaceful enterprises, but it underwrites and often commits violence, secure in the knowledge that it is obeying the Koran’s command to “slay the idolaters [that’s you and me] wherever you find them.”

THE MUSLIM BROTHERHOOD MUST BE CONFRONTED 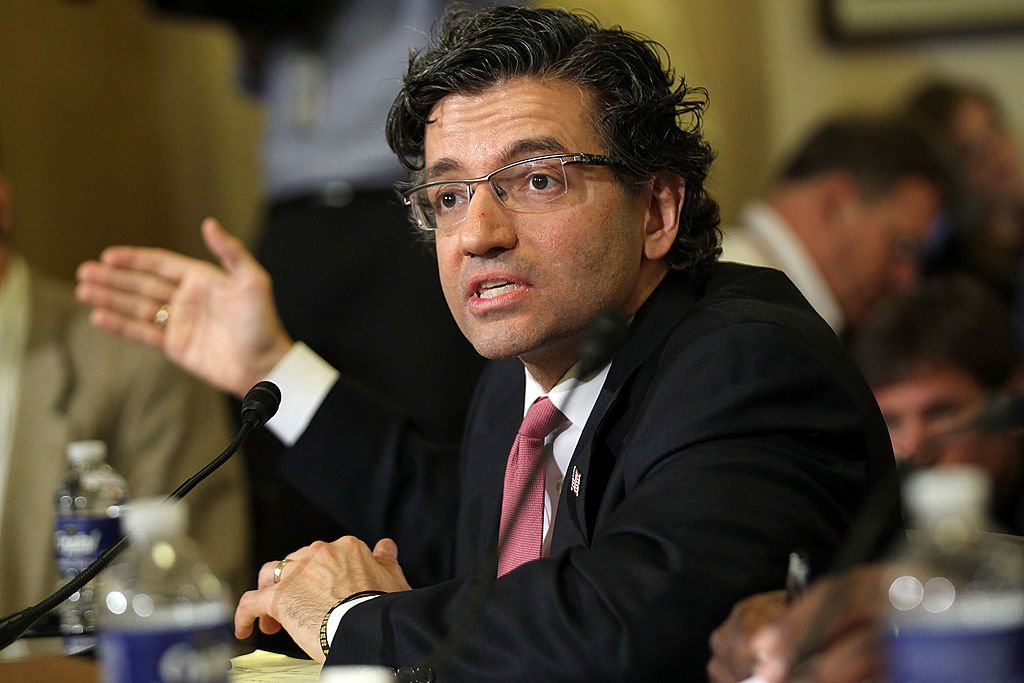 WASHINGTON, DC – MARCH 10: President and Founder of the American Islamic Forum for Democracy (AIFD) Zuhdi Jasser testifies during a hearing before the House Homeland Security Committee March 10, 2011 on Capitol Hill in Washington, DC. The Homeland Security held the hearing to examine “The Extent of Radicalization in the American Muslim Community and that Community’s Response.” (Photo by Alex Wong/Getty Images)

According to Dr. M. Zuhdi Jasser, President and Founder of the American Islamic Forum for Democracy, “The importance of identifying the Muslim brotherhood as a terrorist organization could not be more clear to our national security and counterterrorism strategy.” Pictured: Jasser testifies before the House Homeland Security Committee on March 10, 2011 in Washington, DC. (Photo by Alex Wong/Getty Images)

The White House has, since April, been considering officially designating[1] the Muslim Brotherhood (MB) a Foreign Terrorist Organization (FTO). This designation would follow in the footsteps of countries such as Saudi Arabia, Egypt, and the United Arab Emirates, which have first-hand experience and understanding of the serious threat the MB represents.

The MB’s modus operandi typically works through four stages:[2] Preaching, sharing, use of violence, full control. It would therefore be wise to confront them sooner rather than later, before they manifest their full power.

Some of the organization’s sympathizers and apologists seem sincerely to believe that the MB is a “moderate”[3] group. Sadly, the evidence strongly suggests otherwise. Let us consider some examples.

The MB’s ideological and political backing[4] of the terrorist group Hamas, an offshoot of the MB, is well-documented and publicly acknowledged. Although Hamas claimed to have broken ties to the MB in 2017, apparently to try to improve its ties with the Gulf States, observers were skeptical.[5] While supposedly renouncing all ties to the MB, according[6] to the American Center for Democracy:

That the MB through its affiliates continues to provide Hamas with material support[7] seems an open secret. U.S.-based members of the Muslim Brotherhood established a Palestine Committee[8] that was ultimately charged with the task of raising funds to underwrite[9] Hamas’s efforts to eliminate the state of Israel. Hamas and the MB are reportedly still calling[10] for Israel’s destruction. Terrorist acts by Hamas against[11] innocent civilians and children, even their own,[12] are still ongoing.[13] In April 2018, the European Union condemned[14] Hamas for terrorism and its use of human shields,[15] presumably to prevent Israel from retaliating or to be able to show “dead babies”[16] to the television cameras to cause outrage[17] against Israel, another victim in this plan.

The Qatar-based Sheikh Yusuf Al-Qaradawi, who is called[18] “one of the spiritual fountainheads of the Muslim Brotherhood,” and who led the Friday prayer for the group in Tahrir Square after the 2011 revolution in Egypt, has called[19] suicide bombing “a supreme form of jihad for the sake of Allah” and “heroic operations of martyrdom.”

On October 6, 2012 the late Mohamed Morsi, former President of Egypt and a high-ranking figure in the MB, invited[20] Tariq Al-Zomor (the Islamist who assassinated President Anwar Sadat) to an official celebration, while ignoring the tradition of inviting President Sadat’s family to remember the 1973 Arab-Israel War. Morsi also urged[21] Egyptians to “nurse children and grandchildren on hatred for Jews and Zionists.”

So much for describing the MB as “moderate.”[22]

The motto[23] of the Muslim Brotherhood states:

“Allah is our objective. The Prophet is our leader. The Qur’an is our constitution (dostoorona; lit. constitution). Jihad is our way. Dying in the way of Allah is our highest hope.”

If “jihad is our way” and “the Quran is our constitution,” it would irrational not to postulate that the MB and its related groups in the U.S. endorse violence to change the U.S. constitution and replace it with the Quran.

“So when the sacred months have passed away, then slay the idolaters wherever you find them, and take them captives and besiege them and lie in wait for them in every ambush, then if they repent and keep up prayer and pay the poor-rate, leave their way free to them; surely Allah is Forgiving, Merciful.” — (Qur’an 9.5), Shakir translation.

“Slay them wherever you may catch them and expel them from the place from which they expelled you. The sin of disbelief in God is greater than committing murder. Do not fight them in the vicinity of the Sacred Mosque in Mecca unless they start to fight. Then slay them for it is the recompense that the disbelievers deserve.” — (Qur’an 2.191) Muhammad Sarwar translation.

In the Islamist vocabulary and MB motto, let us remember that the organization Islamic Jihad, which assassinated[27] Egyptian President Anwar Sadat, was not seeking peaceful change. In mainstream Islamic sources, the definition of jihad is predominantly described in terms of violence.[28] As Dr. M. Zuhdi Jasser, President and Founder of the American Islamic Forum for Democracy, noted[29] in congressional testimony:

This is their logo

I think it’s important to understand what they are. They have not changed their logo. And at the bottom, under those swords, which are not peaceful, that are not violent symbol, it says wei du (ph).And wei du (ph) is from chapter 8, verse 16 of the Koran, and it says “make ready.” And it’s not the Boy Scouts’ “be prepared, make ready.” This is a passage in the Koran that refers specifically to battle and preparing for militancy. This, despite them coming to power in Tunisia and Egypt and elsewhere, they never change the symbol and what they are.

One would need to twist the traditional meaning of the word jihad to prove that it was actually meant in the peaceful sense of the word.

Another important point to consider is the otherwise surprising cooperation between Shia Iran and the Sunni Muslim Brotherhood, despite vast theological differences. It is telling that Iran was one of the first countries to object[30] to President Trump’s announcement that he might designate the MB a terrorist organization.

Any honest observer can see that both the Iranian Mullahs and the MB hate the United States,[31] share a global agenda to destroy Israel[32] and, indeed, all of Western civilization.[33]

MB influence in Turkey[34] is also worrisome. Over the past few decades, the MB and their supporters have managed to Islamize a significant portion of Turkish society. The current president, Recep Tayyip Erdoğan, is a strong supporter[35] of their organization. Imagine for a moment what might happen if the European Union made the mistake of accepting Turkey as a member. Turkey could, as it has been threatening[36] to do anyway, dramatically facilitate the MB agenda simply by providing entry visas for huge numbers of Islamists from across the Middle East. They could quite literally flood Europe, which is already facing a possible clash of civilizations,[37] and, even without unleashing new waves of terror, demographically change the future of the Europe forever.

The MB plan to force Europe to submit to their Islamic agenda can also be seen in their strong[38] influence in Qatar,[39] one of the biggest producers of natural gas on the planet, and where the country’s broadcaster, Al Jazeera, founded and supported by Qatar’s ruling Al Thani family, is the main megaphone[40] of the MB. Qatar lavishly funds[41] MB operations not only in the Middle East, but also in the U.S. and Europe.

That Qatar has been trying to dominate the European gas market was made clear by their support for terrorist groups[42] in Syria to remove Al-Assad’s regime and allow Qatari pipelines[43] into Europe via Syria and then Turkey. This terror campaign was not limited only to Sunnis in Syria; it has also been extended to support for terrorist groups in other countries such as Egypt, Libya, and Iraq, which can compete with Qatar in exporting energy to Europe. This level of support for Sunni jihadi organizations could not possibly have happened without collaboration[44] with the MB, which is widely regarded[45] as the mother of many of these organizations.

Attempts by the MB to destabilize[46] U.S. allies in the Muslim world, especially Egypt and Saudi Arabia, also cannot be ignored. Both countries currently have leaders who desire to take their countries into modernity and tolerance, and who deserve Western support.

In Egypt, President Abdel Fattah el-Sisi[47] has admitted the role of “religious ideology” in the terrorism problem there. He has confronted the religious authorities, demanding that they provide a moderate interpretation of Islam that does not encourage violence. He has even, as president (for the first time in the history of Egypt), visited and celebrated Christmas mass in a Coptic church.

In Saudi Arabia, Crown Prince Mohammad bin Salman, otherwise known as MBS, has taken unprecedented concrete steps[48] on the path to modernity within the kingdom. He has disbanded the religious police,[49] begun empowering[50] Saudi women, and for the first time visited a Coptic church in Egypt.[51]

We cannot say at this stage that these two countries have been brought fully into modernity. We can say, however, that we have two leaders who want to — or are actually are — taking their Muslim majority countries onto this path. This is a nightmare for the MB, whose goal is to return[52] the Muslim world to the time of Islamic Caliphate. Designating the MB as a terrorist group can impede their ability to resist the noble attempts of these leaders.

Adding to this, the alliance[53] between the MB (and its related organizations and sympathizers) with leftist groups in the U.S. can allow the MB to exert huge influence on U.S. politics to benefit their Islamist agenda. The MB’s de facto control of Islamic banking[54] can only help them achieve their goal for the global domination of their religious agenda.

Other Muslims agree. M. Zuhdi Jasser, in his 2018 testimony before the US House of Representatives, concluded:[55]

The importance of identifying the Muslim brotherhood as a terrorist organization could not be more clear to our national security and counterterrorism strategy. This will begin not only a necessary process of treating the cancer at its core before it metastasizes rather than its byproducts after it has already spread…. I leave with you the following recommendations:

Finally, the MB’s threats to our modern human civilization and security cannot be ignored and seriously need immediately to be confronted — and at all levels.

Dr. Tawfik Hamid, the author of Inside Jihad: How Radical Islam Works, Why It Should Terrify Us, How to Defeat It, is a Distinguished Senior Fellow at the Gatestone Institute.

This article was published September 27, 2019 by the Gatestone Institute and is archived at
https://www.gatestoneinstitute.org/14895/confront-muslim-brotherhood
It is archived at Think-Israel at
http://www.think-israel.org/hamid.confrontmuslimbrotherhood.html