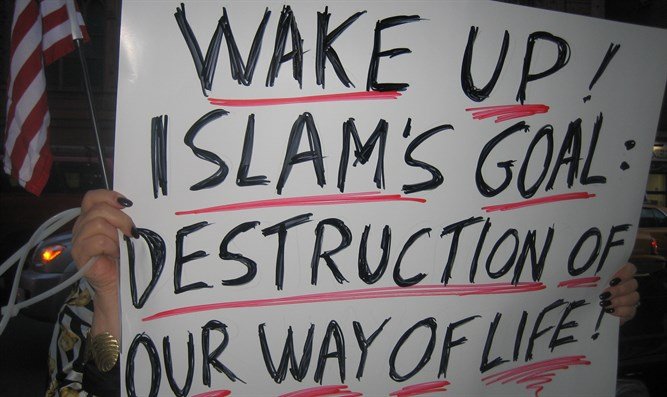 Melanie Phillips describes her insightful article this way: “For the West, there are no ‘forever wars.’ Its wars are either won or lost; there are victors and vanquished. For Islamic extremists, war is indeed forever; defeat is only temporary.” She makes the point that “while real prejudice against Muslims is wrong, ‘Islamophobia’ was invented by the holy warriors of the Muslim Brotherhood to silence any adverse comment of Islam. It was a religious obligation to impose a Muslim law of blasphemy. By enlisting against ‘Islamophobia,’ the West has effectively bent its knee to Islam whose very name means submission.” If we are to fight Islam’s ambition to conquer all countries and vanquish all competing religions, we must start by describing the problem properly. Jihadi fundamentalism isn’t a perversion or outlier of Islam. It is intrinsic to Islam. And thanks to organizations like the Muslim Brotherhood, adherents don’t just argue theology. They actively undermine the political, judicial and educational systems of host countries. From their own documents, we have learned that their objective is to eliminate and destroy Western civilization from within.

AUTHOR: Melanie Phillips is a British journalist, broadcaster and author. Currently a columnist for “The Times of London”, her personal and political memoir, “Guardian Angel,” has been published by Bombardier, which also published her first novel, “The Legacy.” Her website is at melaniephillips.substack.com.

This article was published September 10, 2021 by Arutz Sheva and is archived at https://www.israelnationalnews.com/news/313252/.

For the West, there are no “forever wars.” Its wars are either won or lost; there are victors and vanquished. For Islamic extremists, war is indeed forever; defeat is only temporary. Op-ed.


(JNS) Few of us, if any, will ever forget those terrible images of the 9/11 attacks on America. Twenty years on, it’s painfully clear that many Westerners still don’t grasp the full nature and scope of what they witnessed when the twin towers of the World Trade Center in Lower Manhattan fell.

The West, particularly Britain and America, had mostly ignored the fact that this war had already been under way against itself for at least a decade.

In the 1980s, Western-backed mujahideen ran the Soviet Union out of Afghanistan. The British and Americans ignored warnings that those fighters were Islamic fundamentalists who would now be galvanized to follow their defeat of the Soviet empire by attempting to defeat what they saw as the Western one. The rise of Al-Qaeda and the 9/11 attacks were the result.

But the West had also ignored the mounting evidence of a cultural onslaught against it that had been waged by both Sunni and Shia Islam for years.

By enlisting against “Islamophobia,” the West has effectively bent its knee to Islam—whose very name means submission.

Britain seemed oblivious to the fact that, during the 1980s, Muslim immigrants had brought with them institutions dominated by the fundamentalist Wahhabi strain of Islam that had been imported into Pakistan and Bangladesh from Saudi Arabia. With a growing domestic constituency of fundamentalists who were being either ignored or indulged, Britain was sleepwalking into Islamization.

In 1989, the British writer Salman Rushdie was sentenced to death by Iran’s Supreme Leader, Ayatollah Khomeini, for insulting Islam in his novel The Satanic Verses. He was forced to live in hiding for years, with his book publicly burned on British streets.

Yet few grasped that this was far more than an attack on a writer. It was an attempt to force the West to submit to Islamic values. And the emergence of the Shia Islamic Republic of Iran itself galvanized in turn the Sunni world to jihad.

After 9/11, however, the West told itself that jihadi fundamentalism was a “perversion” of Islam. This is dishonest. While many Western Muslims personally endorse human rights and deplore the atrocities perpetrated in the name of their religion, jihadi excesses are nevertheless rooted solidly in Islamic religious texts. Sept. 11 was an act of Islamic holy war.

Those who cannot even bring themselves to name the enemy that is waging war upon them will be defeated by it. That’s why the claim of “Islamophobia” is so troubling.

For while real prejudice against Muslims is wrong, “Islamophobia” was invented by the holy warriors of the Muslim Brotherhood to silence any adverse comment of Islam. It was a religious obligation to impose a Muslim law of blasphemy. By enlisting against “Islamophobia,” the West has effectively bent its knee to Islam—whose very name means submission.

Even today, Britain has not outlawed the Muslim Brotherhood, ignoring the way its sponsorship of myriad groups and institutions has embedded the jihad into British and Western society.

In 2004, The Washington Post reported that American Muslim Brotherhood supporters made up “the US Islamic community’s most organized force” by running hundreds of mosques and business ventures, promoting civic activities and setting up organizations to promote Islam.

Yet documents unearthed during the Holy Land Foundation trial in 2007 alleged that the Muslim Brotherhood in America was involved in weapons training, counter-espionage against the FBI and CIA, and “eliminating and destroying the Western civilization from within.”

No less perversely, the West has continually denied that the Arab and Muslim war against Israel is rooted in Islamic holy war (a blindness shared by Israel itself, which chooses to deal with this war of annihilation on more manageable nationalistic rather than religious grounds). It has similarly ignored the anti-Semitism that courses through the Islamic world, even though leading Islamists have acknowledged that their fear and hatred of the Jews lie behind their war on the West and modernity.

The 9/11 terror attacks didn’t just reveal the West’s blindness over Islamization. They also exposed its cultural and civilizational fault line that had been opening up since early in the 20th century.

British isolationism is rooted in the carnage of the First World War. In America, the avoidance of what Thomas Jefferson called “entangling alliances” goes back to the founding fathers.

Appeasement-minded Britain and America woke up to the threat from Hitler almost too late—and too late to prevent the Holocaust.

But after the Second World War, Western elites persuaded themselves they could actually abolish war itself. Economic ties would avoid it, international law would prevent genocide, and war itself would be replaced by negotiation and “peace processes.”

For a while, 9/11 punctured this lethal fantasy, resulting in the wars in Afghanistan and Iraq to suppress their incubation of Islamic terror.

In both places, however, the West was unable and unwilling to stay the course. Public rage at the junking of the “never war” fantasy was hugely compounded by the West’s strategic error in believing that invading these countries and then helping them become democratic societies would draw their terrorist sting.

The seriousness of the resulting mistakes in Iraq, in particular, seemed to confirm the influential view, in a West that had lost its belief in itself, that this arrogant and imperialistic culture had no right to tell others how to behave.

So the West failed to see that while the execution of these wars may have been deeply flawed, the necessity to defend itself against a deadly foe was all too real and had not gone away.

This loss of cultural self-belief had many causes. Secularism had eroded the biblical foundations of the West. The carnage of World War I destroyed the belief in dying for your country.

Appeasement-minded Britain and America woke up to the threat from Hitler almost too late—and too late to prevent the Holocaust.

Most devastatingly of all, the Holocaust passed a shattering judgment against modernity. So in the repudiation of its foundational beliefs, the West arrived at precisely the same point as the Islamic jihadists.

Of course, Westerners never saw any similarity between themselves and Islamists locked into the seventh century and whom it dismissed as incomprehensible, crazy and worthless.

But in a mirror image, the West was busily severing the connection with its own historic values. This was compounded by an arrogant assumption that Western attitudes were universal.

The West therefore tried to impose its utopian, post-modern belief in negotiation and compromise upon a Middle East and Islamic world that saw conflict solely in terms of victory and defeat, strength and weakness.

And so the West has continued to repeat its fiascos by indulging in the same fantasies that it will end the “forever wars”—whether through the Israel-Palestine “peace process,” the Iran nuclear deal or abandoning Afghanistan, where both British and American governments are now spinning themselves the fantasy that Taliban “realists” will keep the Taliban jihadists in check.

For Islamists, war is indeed forever. For such fanatics, defeat is only ever temporary.

For the West, however, there are no “forever wars.” Its wars are either won or lost; there are victors and vanquished.

And military strength matters less than belief. The 9/11 attackers didn’t use sophisticated military hardware. They hijacked civilian aircraft and turned them into flying human bombs of enormous destructive potential.

What fuels the jihad is the power of an idea. That idea is the cult of death.

To overcome a cult of death, the West needs a belief in life. Its own life. That is the way to draw the necessary courage and resolve from this most somber anniversary; but alas, it seems the most difficult of lessons to learn.

Melanie Phillips, a British journalist, broadcaster and author, writes a weekly column for JNS. Currently a columnist for “The Times of London,” her personal and political memoir, “Guardian Angel,” has been published by Bombardier, which also published her first novel, “The Legacy.”