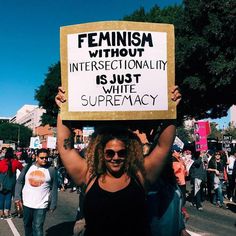 The recently published platform of Black Lives Matter (BLM) states[1] that Israel is responsible for “the genocide taking place against the Palestinian people,” and “Israel is an apartheid state … that sanction[s] discrimination against the Palestinian people.” These statements are anti-Semitic not only because they are false and modern versions of tradition anti-Semitic blood libel, but also because BLM selectively chooses the Jewish State out of all the states in the world to demonize. What has inspired BLM to engage in this counter-factual, anti-Semitic rant? BLM has been guided to anti-Semitism[2] by the concept of “intersectionality.”

“Intersectionality” is the idea that all oppressed peoples and categories of people share a position, and by virtue of that fact are potential allies in the struggle against their oppressors.

“Intersectionality” is a concept used to describe the ways in which “oppressive institutions” (racism, sexism, homophobia, transphobia, ableism, xenophobia, classism, etc.) are interconnected and cannot be examined separately from one another. The concept is credited[3] to the legal scholar Kimberlé Crenshaw, writing in 1989, but it is only in recent years that it has escaped academia and swarmed into the streets.

“Intersectionality” has, however, been extended beyond individuals to types of oppression. The argument, as above, is that all oppressions “interconnected and cannot be examined separately.” Thus, women can never be treated equally or fairly, if blacks face racial prejudice, and the disabled are not given sufficient support to be equal to the abled, and unless the Palestinians are liberated from the Israelis, and the Israelis are liberated from their country, their lives and their home. To make the point, the Israelis are accused of having had a hand, direct or indirect, in the oppression of blacks, women, and the disabled everywhere. So much oppression, intersectionists apparently think, can be traced back to the fraudulent Protocols of the Elders of Zion, and the International Jewish Conspiracy.

How well does “intersectionality” stand up to critical scrutiny? According[4] to the journalist, James Kirchick,

“intersectionality compels one to adopt agendas that have nothing to do with his or her own. Worse, in the name of ‘solidarity’ with other supposedly ‘oppressed’ groups, it leads to alliances with those actively hostile to one’s cause. This is how a gay rights organization led by well-meaning progressives can be duped into disinviting private citizens of the one country in the Middle East respecting the humanity of gays, all at the behest of people who use cultural relativism to excuse Muslim societies that throw homosexuals from the tops of buildings.”

Here are some of its other problems, weaknesses, and errors:

For a start, “intersectionality” urges us to view the world as divided into a conspiracy of oppressors and an agony of oppressed: Victimizers and victims. Two classes, one relationship: oppression. This is the model offered to understand, explain and reform the world. It could not be more simplistic.

Consider “class oppression” by capitalists of workers. Why have tens of millions of rural people in China flooded the cities to take jobs offered by capitalists? Because by so doing they improve their standard of living, their life chances, and the opportunities that they can offer their kinsmen back home. This “capitalist oppression,” which replaced communist political atrocities and economic disasters, has raised China from a backward agrarian society to a modern, developing society.

If we look at the “hot spots” of the world, who are the oppressors and who the oppressed, in Afghanistan, in Iraq, in Syria, in Nigeria? If only simple-minded ideas such as “intersectionality” could help us clarify the destructive disasters and human tragedies — drought, corruption, intolerance, civil war — but unfortunately they are useless.

Further, “intersectionality” focuses on people’s victimhood. People are “oppressed” and disadvantaged, and that becomes the most important thing about them. Reducing people to victims takes away their ability to understand, their ability to act, their motivation, tenacity, resourcefulness, force of character, and everything that enables people to engage the world.

Young women in the West and increasingly the Far East, for example, may not feel oppressed by “patriarchy,” but are confident in their abilities, not as a result of ideology, but as a result of their experience in the world. They know that their fair participation is supported by their societies. Reports making claims such as “women make 70% pay that men receive” have been demolished.[5] Single women working the same hours in the same industries make the same as men; women who choose motherhood work less and make less than men.

Moreover, “intersectionality” reduces people to a number of categories, such as gender, sexuality, race, nationality, religion, capability, etc. Differences, such as sexism, racism, nationalism and ability — as opposed to what we have in common — are reinforced.

In addition, “intersectionality,” in identifying all the oppressed as one, united and with common interests, is incoherent and oblivious to the facts (often, it seems, unpopular in radical social movements). The idea, for example, that victims of Islamophobia and homophobia are natural allies flies in the face of the fact that Islamic law and many Muslims are strongly opposed to homosexuals, and that Iran, for instance, executes homosexuals (even teenagers) by hanging them from cranes in public squares. The Islamic State does not require large machinery; it throws homosexuals off buildings.

There is also a lack of affinity between victims of Islamophobia and victims of racial prejudice. The Arab world — the heart of Islam — has for many centuries, up to today, carried on an extensive black slave trade in Africa, sending Arab expeditions[6] to captures slaves. There has been much observation[7] in recent decades of slaves taken from the south by the Arabs of northern Sudan. Ayaan Hirsi Ali, in her autobiography, Infidel, reports her experiences in Saudi Arabia, where the term for blacks is abid, “slave,” and blacks are denigrated in the street.

Also, advocates of “intersectionality,” such as various political parties — for example the Greens in Canada[8] and Podemos in Spain — and racial groups such as Black Lives Matter, often seem not to identify oppressors and oppressed — never mind about the Chinese occupation of Mongolia, Tibet, and Turkestan, or the annihilation of Christians and Yazidis in the Middle East, or the Arab, Turkish, and Persian war against the Kurds. Instead, they appear to prefer to turn to the historical scapegoat, the Jews, selectively demonize Israel and celebrate the Jews’ terrorist enemies, the Palestinians, as poor, suffering victims . No worries about prejudice against Jews for champions of “intersectionality.” So we should not be surprised to see Quebec nationalists marching[9] with Hezbollah flags , and “anti-racists” in European demonstrations[10] chanting “Hamas, Hamas, Jews to the gas.”

Supporters of “intersectionality” cheer terrorists when they murder Jews. To them, that is just “social justice” at work.

This article was published by the Gatestone Institute and is archived at https://www.gatestoneinstitute.org/8956/black-lives-matter-antisemitism/.
It is archived at Think-Israel at
http://www.think-israel.org/salzman.antisemitismoriginblm.html. The image at the beginning of the article was not in the original. It comes from Pinterest.