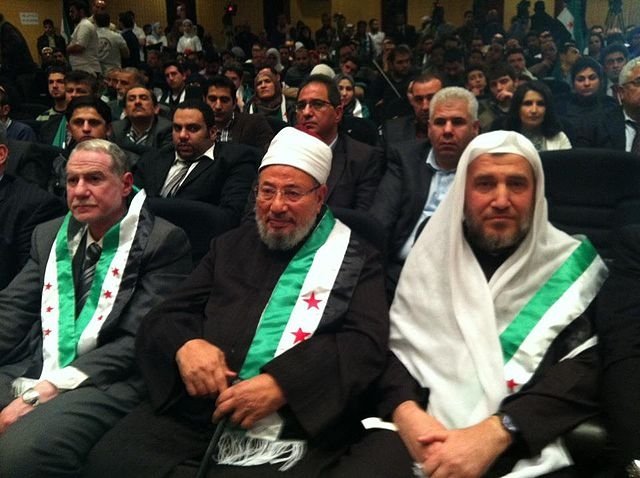 Kyle Shideler writes about Yusuf Al-Qaradawi, one of the Muslim Brotherhood’s (MB) outstanding leaders, who, like the MB itself, is yet to be designated as a terrorist by the USA. Egypt, Saudi Arabia and other Middle Eastern countries have banned the MB, but Qatar remains supportive, especially of Qaradawi, who has been a major figure in shaping Qatar’s educational and banking systems and utilizing an umbrella fund for meting out charity intake to various terrorist groups. His work is not confined to Qatar. “Qaradawi provides Qatar access to an international network of committed Islamist activists throughout the West, who are willing to support Qatari policy goals.” Thus Qatar has a position internationally much larger than its size would indicate. Shideler suggests that labeling Qaradawi a terrorist would put pressure on Qatar to reduce its terrorist-supporting activities.

Yusuf Qaradawi is the man in the middle of the three men wearing green and white shawls.

Yusuf Qaradawi is the man in the middle of the three men wearing green and white shawls.

Last December, Interpol quietly removed a “red notice”[1] — a computerized flag notifying police across the world that an individual is wanted for arrest by an Interpol member state—from Yusuf Al-Qaradawi, a Qatari-based nonagenarian cleric wanted in Egypt in connection to violent protests following the ouster of the Muslim Brotherhood-dominated government of Mohammad Morsi.

Qaradawi has long been central to the ongoing conflict between Qatar and its Gulf and its Arab neighbors—Egypt, Saudi Arabia, United Arab Emirates, and Bahrain—who accuse the small peninsula state of harboring and funding Islamist terrorists[2] and insurrectionists who seek to destabilize the region. The red notice dismissal is a win for Qaradawi’s patron, Qatar, which has refused to distance itself from the Muslim Brotherhood cleric despite this intense diplomatic and economic pressure. While Qatar updated terror designations last year in response to international criticism, it has stubbornly defended Qaradawi.[3]

It is not immediately clear whether the decision to remove the “red notice” was taken at Qatar’s direct intercession. But it is clearly a reflection of how the smaller nation has skillfully wielded influence in a manner that outsizes[4] its larger neighbors. This influence has allowed Qatar to defiantly ignore international criticism over its record of playing host and supporter[5] to terrorists and extremists, especially Yusuf Qaradawi.

To understand why Qatar remains defiantly supportive of Qaradawi requires understanding the significant role he plays in Qatari affairs and in Qatar’s larger influence strategy.

Qaradawi is perhaps best known in the West for his vitriolic anti-Semitism[6] on the Qatari state-run media outlet Al Jazeera and fatwas supporting the use of suicide bombings[7] by the terrorist group Hamas. In 2008, the U.S. government designated the Qaradawi-led international charitable coalition known as “The Union of the Good” for its role in financing Hamas.[8]

The Israeli Security Agency has described the Union of the Good[9] as “the umbrella organization for Hamas and Muslim Brotherhood-affiliated Islamic charity funds.” Union of Good members have been found to support[10] other jihadist groups, including Al Qaeda affiliates.

Qaradawi has been fundamental to the rise of Qatar since he was granted citizenship there after fleeing the crackdown on the Egyptian Muslim Brotherhood in the 1960s. Qaradawi remains an influential spiritual leader and ideologue for the Islamist group. He has twice declined offers to become the Brotherhood’s supreme guide.

As U.S. Ambassador Chase Untermeyer wrote in a 2005 State Department cable, Qaradawi is “the only Islamic thinker in Qatar who matters,” and since his arrival in Qatar, he has wielded tremendous influence throughout Qatar’s religious, media, education, financial and charitable sectors, as a friend and confidante of the reigning al-Thani family.

Qaradawi helped establish the Qatari education system[11] and has been deeply involved with the Qatar Foundation, a nominally independent nonprofit that serves as a vehicle for promoting Qatar’s influence. In particular, the Foundation’s Education City,[12] which has agreements with many U.S. colleges and universities, also hosts the Foundation-run Al-Qaradawi Centre for Islamic Moderation and Renewal and the Qaradawi Scholarship for Islamic Studies. Using the legitimacy provided by U.S. colleges, the Qatar Foundation has promoted Islamist narratives[13] to U.S. teachers.

Qaradawi has played a significant role in the Qatari banking system as an advisor to Qatar Islamic Bank (QIB), Qatar International Islamic Bank (QIIB), and the Qatar National Bank (QNB). All these Qatari banks have been blacklisted[14] by the United Arab Emirates (UAE) over their alleged role in facilitating terror finance.

Outside of Qatar, Qaradawi also exerts great influence. With Qatari support, Qaradawi established an international network for promoting the Brotherhood’s objectives, which he described in a 1996 meeting in Toledo, Ohio as the conquest of the West “through dawah”[15] a term that translates as “proselytizing,” but is often used by the Muslim Brotherhood to refer to their brand of ideological indoctrination.

At the international level this is done through the International Union of Muslim Scholars (IUMS), best known for its 2004 fatwa[16] authorizing the targeting of Americans in Iraq, including civilians. Qatar’s opponents have designated the IUMS as a terrorist organization as part of their effort to combat Qaradawi’s international apparatus.

In Europe, Qaradawi spreads his message through the European Council for Fatwa and Research (ECFR) and the Federation of Islamic Organizations of Europe (FIOE), organizations led by Muslim Brotherhood operatives.[17] Qaradawi has also been influential in the United States, serving as an inaugural trustee for the Islamic Society of Boston, a mosque with connections[18] to more than a dozen terrorists convicted, deported, or killed by police, and founded by a convicted Al Qaeda financier.

Qaradawi provides Qatar access to an international network of committed Islamist activists throughout the West, who are willing to support Qatari policy goals. In turn, Qaradawi’s global reach is bolstered in large part due to Qatari state sponsorship. It is because of Qaradawi’s unsavory ties to Islamists across the globe, not in spite of them, that the Islamist cleric receives Qatar’s full-throated support, ignoring the protestations of their fellow Arab states, and U.S. and European criticism over Qaradawi’s violent rhetoric and terror finance ties.

Because of Qaradawi’s centrality to Qatar’s strategy of using Islamist networks to expand its influence, Qatar can be expected to continue to protect the Brotherhood cleric from international counterterrorism efforts, despite any negative repercussions. Western policymakers should come to understand that the Qatari regime won’t willingly change its stripes. The termination of the “red notice” reflects the mistake of relying on international institutions to police extremists like Qaradawi.

Fortunately, the United States has ready-made tools at hand for addressing this challenge. Most appropriately, the U.S. Treasury can add Qaradawi to the Specially Designated Global Terrorist list for his role in leading the already designated Union of the Good. Expanding designations to other Qaradawi-led organizations based on intelligence gathered about Qaradawi’s network in cooperation with the United States’s Arab allies would tighten the screws still further.

Given Qaradawi’s centrality within Qatar’s system of finance and influence, designating Qaradawi would place real pressure on the Qatari regime in a way that cannot easily ignored.

Kyle Shideler is the director of the Counter Islamist Grid, an initiative of the Middle East Forum. Kyle has written for numerous publications and briefed legislative aides, intelligence, and law enforcement officials and the general public on national security issues.

This article was published by Middle East Forum, January 29, 2019 and is archived at
https://www.meforum.org/57698/label-muslim-brotherhood-leader-terrorist
It is archived at Think-Israel at
http://www.think-israel.org/shideler.qaradawiaterrorist.tml